The temple at Segesta

Before I arrived at the ancient monuments of Segesta, Sicily, I acquainted myself with its war-riddled history, which I found fascinating. According to the Aeneid, Aeneas, the hero of the Trojan Wars, founded Segesta on his way to establish the future Rome, and the first settlers came from Troy. During the Greek era, the town fought again the Sicilian towns of Selinute and Syracuse.

View of the countryside from the amphitheatre

The tyrant Dionysus – not the god – brought terror to Segesta when he took over. One tale that the people used to tell during his tenure as the horror-spreading leader: Dionysus knew that everyone in Segesta prayed that he would die, so his actions became even more ruthless. Then he found out one old woman always prayed that that he would be healthy. He invited her to his palace and asked her why she did not wish him to die as the others did. She told him, “Before you, your predecessor was bad. You’re much worse. So I’m thinking that someone who comes after you might be horrid. That is why I hope you live as long as possible!”

The amphitheatre at Segesta

In 307 BC, when Segesta refused to give money to the tyrant of Syracuse, Agathocles got revenge on the town. He tied Segesta citizens to chariot wheels pulled by horses, launched inhabitants from catapults and cut off their heels, then ordering them to run. He also placed residents of Segesta on a bronze slab and roasted them alive. The survivors set fire to the city, opting to die by flames rather than by torture. The merciless leader was eventually poisoned with a toothpick and died at the stake after a 20-year tenure of terror.

During the Roman era, slave revolts threatened the stability of the republic. The Segesta leader Gaius Verres stole artistic masterpieces, such as a revered statue of Artemis (Diana). Cicero did not mince words and accused Verres of being corrupt and ruthless.

A view of the countryside from Segesta

Clearly, Segesta had not had a rosy time in its heyday. Its history made the struggles in my own life seem petty and insignificant. I was worried about things that should not faze me; I felt stress when I should remain calm. I was thankful there were no tyrants like Dionysus or Agathocles in my life. 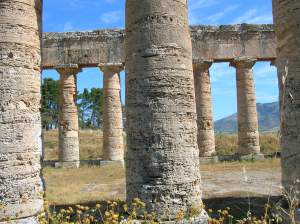 When I approached the Doric temple at Segesta, I was speechless. The limestone Doric columns, six on the temple’s short side and 14 on its long side, were crowned by a clear, blue sky as birds fluttered through the empty interior. The backdrop consisted of rich browns and greens, making the well-preserved temple at Segesta resemble a painting that had come alive. The elegant and majestic structure gave me a feeling of freedom, tranquility and independence. The Boston Marathon bombings, the death and destruction in Syria – for the moment it was as if these tragedies had never happened, and the world was a peaceful place. 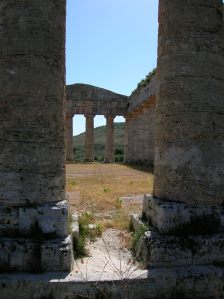 The temple at Segesta

I still cannot fathom that the temple dates back to 430-420 BC.  The barrenness of the inside cleansed me as the harmony of the Classical Age monument blended in with the natural beauty of the landscape. For a moment I closed my eyes and was convinced I was daydreaming. Then I opened them and realized that this beautiful temple from antiquity did really exist. I wanted to climb to the top of one of the columns and look down on the world with a fresh perspective on all the evils and dangers in the world today. Of course, that was not possible. 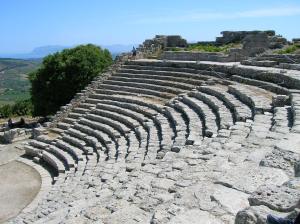 The amphitheatre at Segesta

But the temple would not be the only sight in Segesta to make a profound impression on me. The Greek theatre, built in the third century BC, also boasted artistic mastery with a serene landscape offering views of the gulf of Castellmare. Towns also dotted the countryside. It was if the Greek theatre was one with nature. I could almost see the chorus conductor making a sacrifice to the deity Dionysus (not the tyrant!) on the altar before the plays began at dawn, when the trumpeter would blow his horn to announce the beginning of a full day of tragedies, comedies and satires. I could imagine the artists in their masks in front of painted scenery with the breathtaking landscape as a stunning backdrop.

Now, more than six months after my visit to Segesta, whenever I get stressed or worried, I think of these magnificent sights in Sicily, how they gave me a sense of freedom, as if I were floating over the world, gaining a new perspective. Visions of the Doric columns and amphitheater complementing the awe-inspiring landscape give me a sense of hope when I feel that a dilemma is futile and a sense of calmness when I feel extremely stressed. 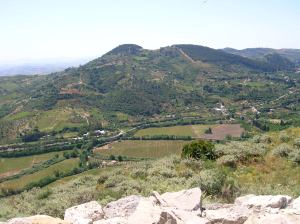 A view of the countryside from Segesta