The exterior of Valtice Chateau

Often overshadowed by nearby neo-Gothic Lednice, Valtice Chateau is one of the most underrated sights in Moravia. I had visited Valtice Chateau twice before and was bewitched by the Baroque gem both times. The first time I came here, an employee took me quickly through the rooms as she did not want to give a tour to only one person. The Baroque and Rococo interior includes some original 18th century furniture, which never failed to impress me.

Usually, I traveled to Lednice Chateau and Valtice Chateau by bus from Mikulov, where I had stayed in a hotel. To catch the bus back to Mikulov after visiting Valtice, I always had to hurry and had never had a chance to see the park. This time I was on a tour with the arsviva travel agency, whose tours I had taken to other sights in the Czech Republic and to towns in Germany. Seeing the garden and town were on the itinerary, too. 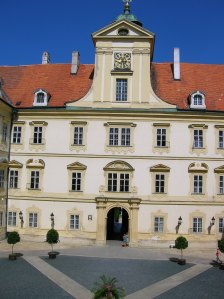 The facade of Valtice Chateau

I already knew the background information. Valtice originated in the 12the century or earlier as a castle. The Liechtenstein clan would greatly influence the development of Valtice. They bought it in 1387 and kept the chateau in the family until 1945, creating a legacy that survived for almost 600 years. During 1560 they chose Valtice as their main residence. The castle became a Renaissance chateau during the 17th century. During the Thirty Years’ War the Swedes damaged Valtice. Later it got a Baroque makeover. Much construction took place during the 18th century. For example, the stunning chateau chapel was completed in 1729. At the end of that century, the chateau theatre was built. The garden, established during the Baroque reconstruction underwent renovations at that time.
Representative rooms at the chateau have been opened to visitors since the first half of the 19th century. Austro-Hungarian Emperor Franz Josef I and his wife Princess Elizabeth, often called “Sisi,” came to the chateau as did Austrian Chancellor Klemens von Metternich. When the chateau became the property of the Czechoslovak Republic in 1920, there were no changes made. 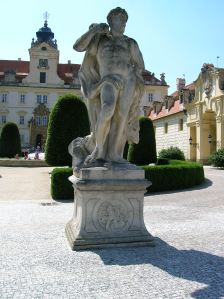 But those golden days did not last forever. World War II came, and after the war the chateau was plundered. Considered to be traitors, Soviet prisoners-of-war were shot at Valtice. Then a section of the chateau became a forced labor camp for women while another part was used for drying hops. The grounds were in poor condition, too. Extensive reconstruction took place in the 1960s, and now Valtice is a Baroque beauty. The chateau even made the UNESCO World Cultural Heritage List during 1996, an honor that is well-deserved. 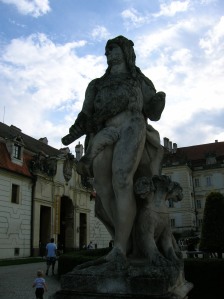 The mammoth statues of Hercules in front of the chateau gave me an imposing welcome. When I looked up at them, I felt that I played such a small role in the huge, scary world. This feeling was not negative; rather, it was humbling. The comprehensive tour lasted one hour. It covered the representative rooms, the emperor’s apartments and the chapel that had been lauded throughout Central Europe. 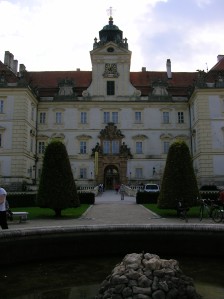 Our guide was a very scholarly and enthusiastic woman. She clearly liked her job. In the entranceway I saw Japanese porcelain from the 18th century as well as an impressive carriage. The Antechamber was a real treat – I loved the Oriental pink-and-green wallpaper decorated with pink flower buds. I loved the ceiling paintings throughout the chateau. They featured mythological characters. The Emperor’s Salon featured portraits of the Habsburg family – Maria Theresa and Joseph II were two of those making appearances. In another space I saw paintings of battle scenes from the Napoleonic Wars. In this particular room the Roman gods’ victory over the Titans was the pictorial theme. 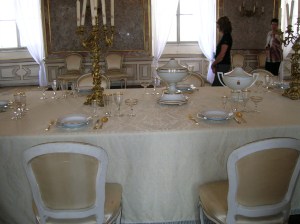 The Dining Room was the biggest space in the chateau. The pink-and-grey imitation marble on the walls looked so elegant and majestic. Above the doors I saw extraordinary reliefs of musical instruments. It reminded me of college, when music had played such an important role in my life. I adored my private piano lessons, even though I was not very talented. During college I was introduced to the magical world of classical music, which I still listen to today. I even went to the symphony in a nearby town once a month, momentarily escaping university life. I should make music a more significant part of my present, I chided myself. The Baroque 18th century chandelier and the Empire style side tables added to the splendor of the room. The view of the park was superb, too.
In another space I liked the floral and bird motifs on the royal blue upholstery on the chairs. The design was so lively, so energetic. I also noticed a Baroque landscape painting by a Dutch painter. I had been enamored by Dutch and Flemish landscape renditions ever since my first semester of college, when I took a course on Dutch and Flemish art. The chandelier, though, was what fascinated me most. It featured Triton and was decorated with antlers. Somehow the two looked out-of-place together. They did not complement each other. Yet that only made the chandelier more unique and more intriguing.

The unique chandelier and exquisite furnishings

The Red Salon or Smoking Room featured an exquisite large mirror. How I would love to look into that mirror every day! Olympic gods looked down on me from the ceiling. Paintings with biblical motifs also decorated the room. The two bureaus made with ivory were stunning, forged in the Florence style and dating from the 17th and 18th century. The jewel chest in the Ladies’ Salon showed off Chinese motifs, and the wings featured a Chinese landscape. The ceiling painting was outstanding; it showed the conquering of Troy. In a bedroom there was an elegant bed with canopy. The Madonna painting hanging behind it was a copy of a work by Raphael.

A captivating bed in Valtice Chateau

The Marble Salon boasted ornamentation from the 18th century. I loved the pink-and-grey imitation marble on the walls. It was so elegant, so sophisticated! I would love to have walls decorating in that fashion in my house. Floral still lifes dominated the walls, and the god Flora took precedence in the ceiling painting. On one wall in another room there was the shell of a huge tortoise between rifles. I had seen many hunting trophies on walls, but never that of a tortoise. The library featured over a 1,000 volumes, most in French but others also in German and Latin. There was even an old-fashioned elevator in the chateau. 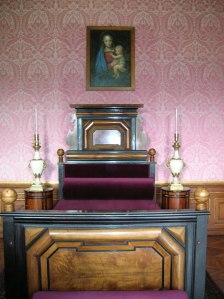 Another exquisite bed in Valtice Chateau

It was a pity we could only see the chapel through a glass partition from one side of the upper level. I admired the richly decorated balcony of the chapel that dated from 1726. The intarsia on the benches below astounded me. Such exquisite detail! There were several paintings in the room from which we peered at the chapel. A 15th century oil painting of Jesus Christ with the Cross proved to be the oldest picture in the chateau. I loved the Baroque Picture Gallery with the paintings set so close together. It was overwhelming, though. There was so much to see on each wall. Hunting themes dominated the room. The ceiling painting carried the same theme – it featured Diana, goddess of the hunt. I loved the Holland Baroque furniture in the Study. It reminded me of the Holland Baroque furnishings I had seen at Český Šternberk Castle in central Bohemia. Other rooms featured ceiling paintings of the Allegory of Morning and the Allegory of Evening.

In yet another space there was a unique bureau. A section of it opened to reveal a desk, but the bottom part was for storing laundry. It was dazzling, made of ivory with intarsia from various woods. There were also Dutch still lifes of fruit and vegetables and an elegant, light blue bed with a canopy. The ceiling painting focused on the allegory of spring. I wanted to pick some of the flowers out of the basket that was portrayed there. The Reception Room featured pink chairs and wallpaper, giving it a cheerful atmosphere. Baroque landscape paintings dotted one wall.

Next we saw the Baroque park, built midway through the 18th century. Fascinating architectural objects had been situated there at one time. Perhaps it had been most famous for its gloriette. At the beginning of the 19th century, the park was expanded. There was even an amphitheatre with Baroque statuary built in the park during the early 20th century. Vases and benches had also been part of the park decor. Now those objects are gone, but the park remains intriguing with its many varieties of trees, bushes and flowers.

We also visited the small town of Valtice, focusing on the main square. The Church of the The Assumption of the Virgin Mary, situated on the southeast side of the main square, was the most impressive sight in my opinion. The Baroque masterpiece hailed from 1679. It had been built after the earlier church collapsed. The church proved to be a harmonious and tranquil continuation of Roman architecture with significant sculptural decoration. At one time a painting by Peter Paul Rubens adorned the main altar, but it was transferred to Vienna during the Prussian Wars because of the threat of invasion by the Turks. Now it hangs in the National Gallery in London. The church has one rectangular nave with side chapels and a wide main altar. The stucco decoration and sculptural ornamentation is impressive. I was also intrigued by the cupola.

The Baroque Plague Column hails from 1670, when the lands were experiencing a plague epidemic. It was not completed until the second half of the 18th century. The Virgin Mary crowns the column while five saints also make appearances, including Saint Sebastian and John of Nepomuk, who was drowned in the Vltava River on the order of Bohemian King Wenceslas. 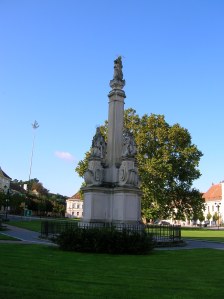 The Plague Column in Valtice

I was overjoyed that I had had the opportunity to see all the rooms open to the public plus the garden and town. Thanks to our superb tour guide, I learned information that I would have never known if I had come there by myself. I just wished tourists would appreciate Valtice as much as they did Lednice. Valtice shouldn’t be in second place but tied for first.