I traveled by bus with Regiojet to Pilsen to see two flats designed by Viennese architect Adolf Loos during the first third of the 20th century. I was already familiar with his architecture. Loos had made the Müller Villa in Prague into an architectural gem. When I visited the Müller Villa, I had been fascinated by the contrast of the spartan exterior and luxurious interior. Loos’ use of rare woods also greatly impressed me. I liked the symmetry and the harmony of the spaces in the Müller Villa. The Japanese theme in the Winter Dining Room entranced me, too.

This tour included two flats – the one that Loos designed for the Kraus family at 10 Bendova Street and the apartment in which the Vogl family had resided at 12 Klatovská Street. Luckily, Bendova Street is within walking distance of the town center. You can almost see the Great Synagogue from there. I stood in front of the building on Bendova Street. It looked like a typical apartment building in the city, but, of course, Loos did not design the exterior – only one flat inside. 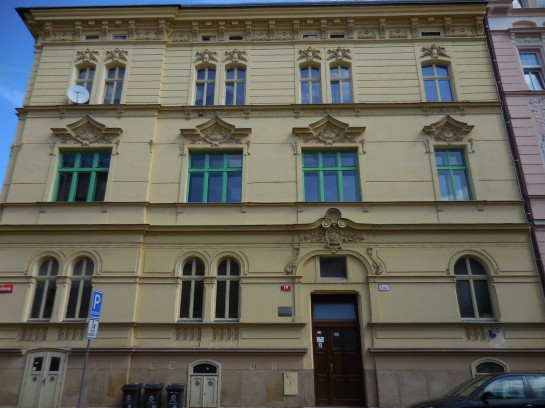 Soon it was time for the tour to begin. Facing me was a huge black-and-white photo of Loos. He was holding headphones because he was hard of hearing. He wore a pearl in his necktie. I was familiar with Loos’ background. Born in Brno, he received Czech citizenship thanks to Czechoslovak President Tomas G. Masaryk. Loos had lived in Vienna, the USA, Paris and Dresden, among other places. He had finished his studies in the Czech lands. Loos admired classicist modern architecture, which stressed simplicity and symmetry. His style was influenced by the architecture of ancient Greece and ancient Rome. Trademarks of Loos’ creations included a lack of decoration on exteriors, a penchant for symmetry and the use of expensive materials such as stone, marble and various types of wood. The Viennese architect had had a close relationship with the city of Pilsen. He designed no less than 13 interiors there, though only eight have been preserved. Four of them are open to the public. 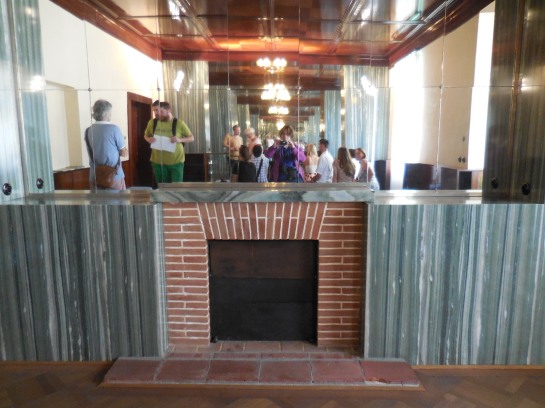 The flat at Bendova 10 was commissioned by chemist Vilém Kraus, who lived there with his wife and two children. Loos worked on the project in 1930 and 1931. The family would not live at this address for long because they were of Jewish origin, and the Nazis took over in 1939. Gertrude and the children were sent to a concentration camp, where they perished. Vilém, however, survived World War II. After the war, the Communists confiscated the flat, so he moved to Britain. During totalitarian times, the flat was divided into three sections for three families, and part of Loos’ design was destroyed. 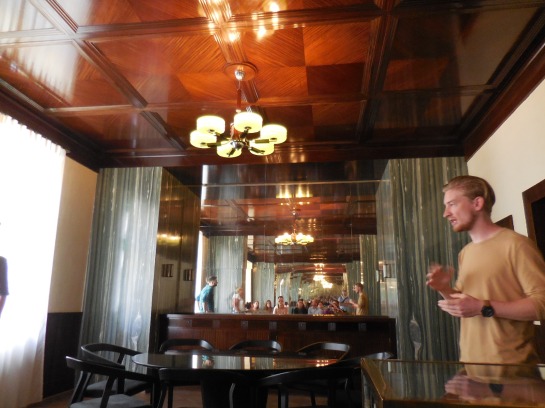 The guide led us into a space divided into the dining room and the living room. There were two mirrors opposite each other in the long space. They created a multiplying effect. I felt as if I was in the room full of mirrors at Lindenhof Palace in Bavaria. I had a feeling of being watched and of spying on others at the same time as I saw reflections of myself and the other participants of the tour. It made me self-conscious and paranoid. I found the mirrors to be jarring. Two pilasters made of rare marble flanked the mirror in the dining room. This feature reminded me of the living room in the Müller Villa, where Loos utilized two marble pilasters. The living room of the Müller Villa also had been divided into parts. 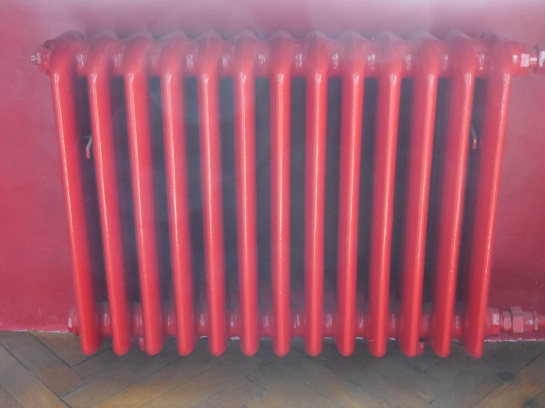 On the other side of the room, a fireplace played a central role. In the living room of the Müller Villa, there had been a fireplace as well. There was a mirror above the fireplace, and I noticed the white and green marble decoration. Typical for Loos, there was no ornamentation. His design emphasized the beauty of the materials, in this case, the marble used in the room. The ceiling also appealed to me. It was made of dark mahogany.

In the hallway a closet opened to reveal three sections where dirty laundry could be placed. I thought that the device was efficient and rational. We went into another room dominated by light blue wallpaper on one wall. It added a vibrancy to the small space where pictures of Loos and the apartment were on display. The wallpaper was not original, though. I noticed the bright red radiator. In the Müller Villa Loos had also had the radiators painted red. He wanted them to be visible instead of hidden. 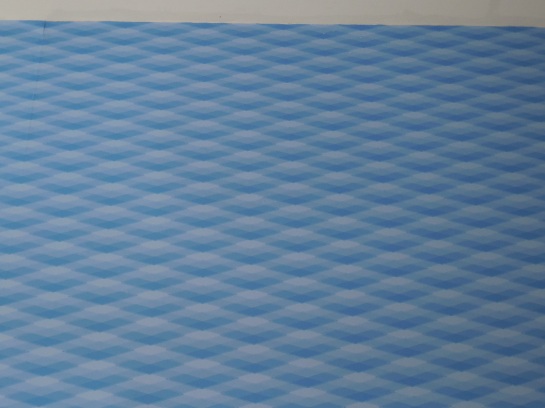 In the bedroom the desk and closet were made of Finnish birch wood. The closets had drawers and hooks for hats. I remembered the moveable drawers and hooks in the closets of the men’s and women’s bedrooms in the Müller Villa. These were details that Loos often employed. In a side panel below a window, there was a safe. The bed was blue, and I wondered if it had been this color when the Krauses lived here.

Soon the tour ended. I was surprised that the flat was so small. I had been expecting something on a grander scale. Still, I was intrigued by Loos’ design, especially by the use of rare materials and mirrors. 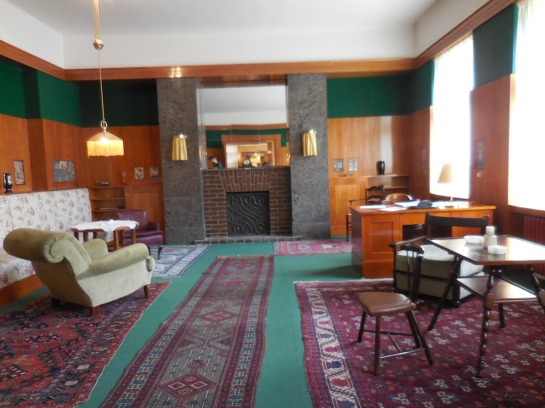 Our group then walked about five minutes to 12 Klatovská Street. Again, the exterior of the building was nothing special. The two preserved rooms in this flat turned out to be located amidst a labyrinth of offices. Originally, the interior had been furnished for businessman Otto Beck, but when he moved out, the new tenant, Josef Vogl, wanted Loos to make adjustments because the dentist needed a section of the flat for his practice and another part for his family. It was Loos’ job to harmonize the two sections. In 1928 and 1929, Loos designed a waiting room and an X-ray room in addition to the doctor’s office. During the Second World War, the apartment was turned into offices. Unfortunately, the part of the flat used for Vogl’s practice was destroyed. The bedroom and children’s room are no longer visible, either. The family did not return after the war, and then the spaces had been used for administrative purposes.

We did, however, have the opportunity to see the living room and dining room, both of which greatly intrigued me. One room was divided into a study with a desk and chair and a living room area with a floral-patterned couch and various chairs, each one unique. I recalled the chairs in the living room of the Müller Villa. There, too, all the chairs had been different, and each one had been extraordinary in some respect. I especially liked the low armchair, and I recalled the low armchairs in the Müller Villa. Another chair that fascinated me was the tiny one on which only a small child could sit. It was a copy of an Egyptian chair from a museum in London. 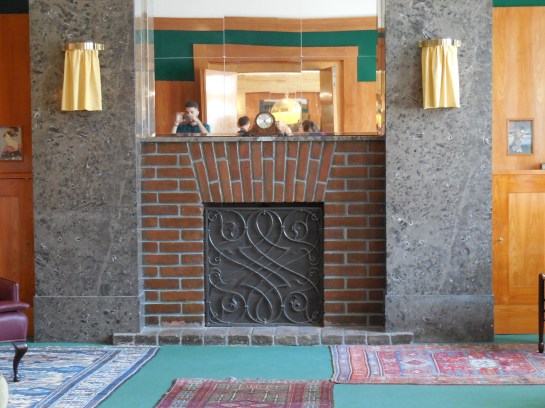 Marble pilasters flanked a fireplace made of red brick. Again, I noticed that the fireplace played an important role in Loos’ design. The walls were decorated with Japanese woodcuts. After Loos had visited the Chicago World’s Fair, he had become intrigued by Asian art. I recalled the Japanese lantern light and other Asian elements in the Winter Dining Room of the Müller Villa. There were even a few Japanese lantern lamps here, too. The room boasted symmetry, one of the features of Loos’ creations that appealed to me the most.

The dining room was a different, though no less intriguing, story. The yellow travertine walls gave it a warm orange color that I liked. I recalled that travertine had been one material used in the Müller Villa, too. Mirrors dominated the space, set above a long counter on the back wall. A big conference table took up most of the space. The dining room in the Müller Villa had been dark; this room was light and airy. The mirrors blended in with the rest of the design in this space. I did not feel awkward.

I liked the design of these two rooms more than I had liked the Kraus’ apartment, although I appreciated the unique and daring features in both flats. In the Vogl family apartment, I felt as if I could sit at the desk in the study and write or lie down on the couch and read. The space was comfortable and appealing. Even though the Vogl family apartment was now only comprised of two rooms, those spaces had a lot to say.

I left Pilsen, vowing to return to see the two other flats that Loos had designed in this city. I would recommend this tour to anyone interested in architecture and to anyone who had enjoyed visiting the Müller Villa.