The Royal Palace of Naples was the seat of the Spanish and Austrian viceroyalty for 200 years, from the early 16th century to the early 18th century. Then the Bourbons took up residence, from 1734 to 1860. Even though the foundation stone was laid in 1600, the actual construction of the palace was not finished until after 1843. It is connected to the majestic Teatro di San Carlo and is located on the symmetrical Piazza del Plebiscito, where festivals and parades had taken place before 1860. The Palazzo Reale was first open to the public in 1919.

The façade is impressive as Tuscan, Ionic and Corinthian columns, obelisks, globes and vases all make appearances. Statues of the kings of Naples adorn the façade as well.

When I was there only the first floor was open, but I was still able to see stunning tapestries, fine porcelain, impressive furnishings and superb ceiling paintings, some allegorical and others celebrating the Spanish rulers and their realm. Paintings that amazed included 17th and 18th century works by Neapolitan School artists, landscapes, views of seaports, pictures of royal Spanish palaces as well as portraits. 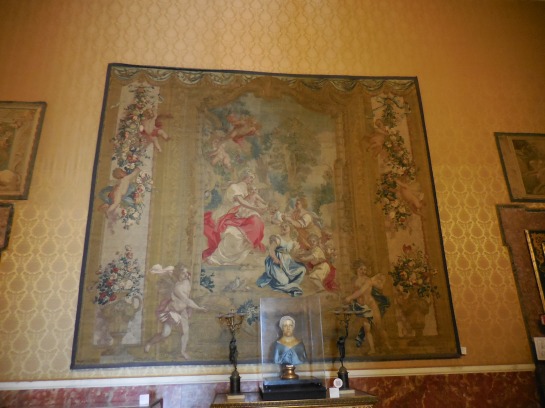 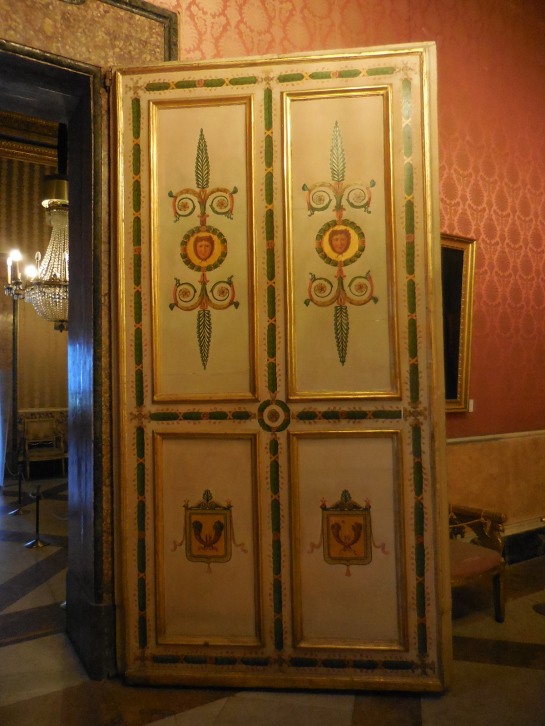 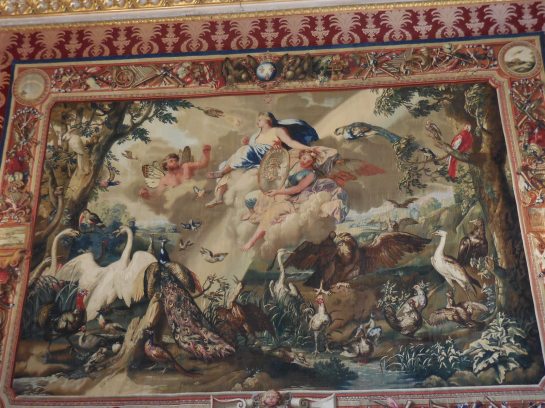 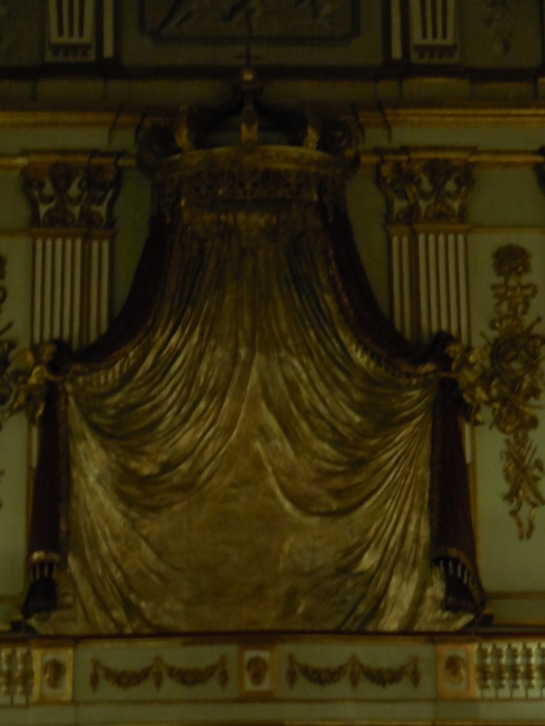 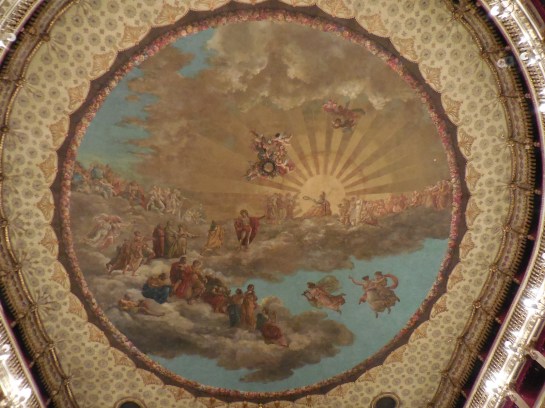 While in Naples, I toured the Teatro di San Carlo, where I could actually feel the history of the majestic structure. I was enchanted with the main hall, boxes, Royal box and two foyers. Even the façade was astounding. I particularly liked the statue of Apollo riding his chariot and the Ionic loggia.

I found the history of the place fascinating. Built in 1737, when King Charles VII of Bourbon was on the throne, the Teatro di San Carlo is 41 years older than the La Scala Theatre in Milan and 55 years older than the La Fenice Theatre in Venice. The architect of this building where opera and ballet are performed was Giovanni Antonio Medrano, who had served in the army of King Charles VII. He went on to design the Museo di Capodimonte, which housed the king’s palace and a museum. Later he was imprisoned for tax fraud of the Museo di Capodimonte. 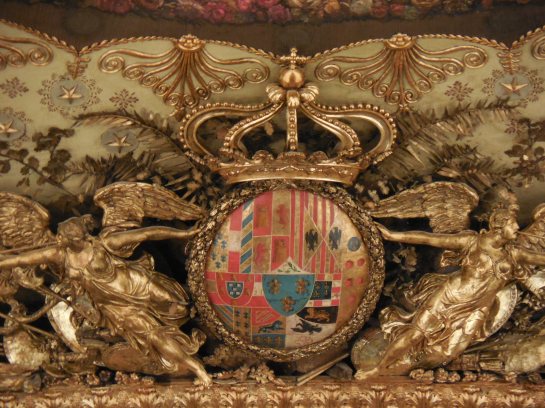 Opening night at the Teatro di San Carlo took place November 4, 1737, on the king’s name day, when Achilles in Sciro was staged. Interestingly, a woman played the part of Achilles. That was only the beginning of the glorious history of Naples as a cultural center and opera powerhouse. I wondered how many stories had been played out on the stage, how many spectators had viewed performances over the centuries and who exactly were these theatregoers. What impressions did these audience members take home with them? Did they feel as awed by the theatre as I did, or did they just take the luxurious building for granted? 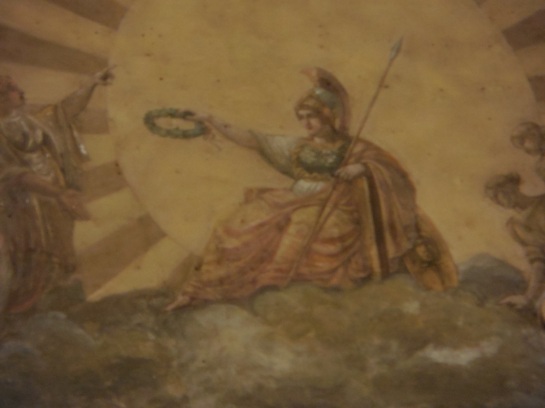 Perhaps the darkest day in the history of the theatre proved to be February 13, 1816, when a fire broke out during a dress rehearsal. In less than one hour, the dancing flames destroyed a large section of the building. The theatre was reconstructed in a mere nine months, and it took on a horseshoe appearance. The number of seats dwindled from more than 3,000 to 1,444. The Teatro di San Carlo holds the distinction of being the oldest horseshoe style theatre in the world. The theatre even remained open during most of World War I. The foyer was destroyed by a bomb attack in 1943, however. However, the structure was rebuilt promptly after the war.

Looking around the gold-and-red decorated interior with 184 boxes plus the Royal Box, I could not help thinking about the famous people who had graced the stage and the composers whose works had come to life here. Richard Strauss conducted here. Guiseppe Verdi wrote operas for this very theatre. In the 18th century, singers Vittoria Tesi and Carlo Broschi charmed audiences with their magical voices. Niccolo Paganini cast his spell on spectators here on two occasions. Other names associated with the theatre included Christoph Willibald Gluck, Johann Christian Bach and Luciano Pavarotti. 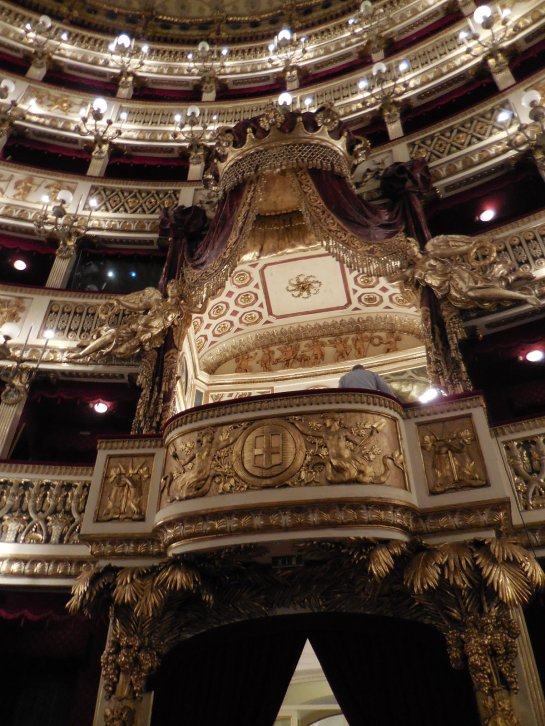 To be sure, the interior was breathtaking. The ceiling fresco took up a mythological theme, portraying Apollo presenting Minerva to the greatest poets in the world. The theatre curtain, adorned in 1854, also boasted a mythological scene with the Muses and Homer among poets and musicians. Putti and cornucopias played significant roles in the theatre’s decoration. The Royal Box, so bewitching in its gold color, could hold 10 people. There were workers repairing something in the Box, but we still got to sneak inside for a few moments.

Taking a seat in another box, I did not want to get up and leave. I just wanted to imagine all the scenes performed here, all the songs sung, all the music played. And then there were those richly adorned balustrades! The 184 boxes stood on seven levels. None of the boxes was furnished with curtains because the king wanted to be able to see spectators at all times.

The theatre was so beautiful that it made me dizzy. It seemed only fitting that such a majestic theatre was connected to the Royal Palace, which the Spanish viceroyalty had called home for 200 years, from the early 16th century to the early 18th century. I hadn’t been so impressed with a theatre since I had set my eyes on the Rococo horseshoe-shaped Cuvilliés Theatre of the Munich Residence.

When I bought my ticket, I hadn’t known what to expect. I hadn’t thought I would be so impressed, but the ceiling fresco, theatre curtain, red-and-gold decor and gilt adornment mesmerized me. I hoped to come back here to see an opera someday. This tour was one of the highlights of my trip to Naples.