My visit to the Gallerie d’Italia in the Palazzo Leoni Montanari of Vicenza proved to be one of the most enthralling art experiences I have ever experienced. The gushingly Baroque palace was built in the 1670s, commissioned by Giovanni Leoni Montanari. The combination of statuary, stucco and fresco decoration in the building enhanced my great interest in the exhibitions. Owned by Intesa Sanpaolo bank and opened in 1999, the gallery houses a collection of vases from Attica and Magna Graecia, 18th century Venetian painting, a unique 17th century Carrara marble sculpture and the most impressive collection of Russian icons I have seen outside of the Russian Museum and the Hermitage in St. Petersburg. In this post, I am concentrating on the interior of the gallery itself and the exhibition of Russian icons as well as a temporary show of Soviet era icons.

While the palace is by no means as vast as the Hermitage or Prado, it certainly made an everlasting impression. In fact, its size allows for an intimate atmosphere in which the visitor can become well-acquainted with its displays without feeling overwhelmed, though the gallery is by no means small.

This definitely is one of my favorite art galleries in the world, ranking up there with the Doria Pamphilj in Rome or Lazaro Galdiano Museum in Madrid. The Baroque palazzo is a work of art itself. Indeed, the palace ornamentation is unbelievably rich. The inner courtyard with loggia features a superb statue of Hercules clubbing a monster to death. Just looking at the statue makes one feel imbued with the mythological character’s strength and determination. I was reminded of the theme of Hercules that was promoted in the Teatro Olimpico, an architectural gem designed by Andrea Palladio and a breathtaking sight I had visited earlier that day. In addition, in the palace courtyard I saw five frescoes sporting classical themes. 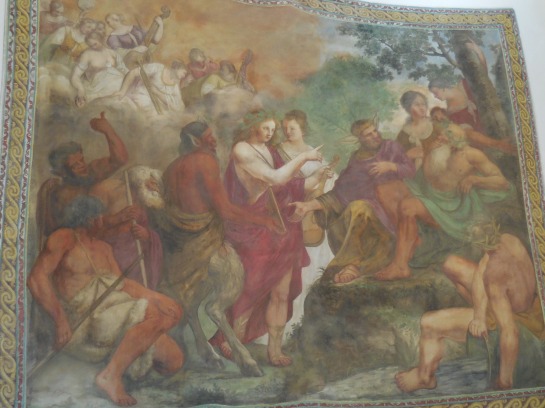 Sculptural adornment greets the visitor in the entrance hall as dragons and hideous creatures make appearances in stucco forms. One space near the main staircase is designed as a sort of grotto with exquisite painting decoration. The Hall of Apollo celebrates that deity as well as Hercules. It features tapestries and stucco portrayals of protagonists from The Iliad, too. The Room of the Old Testament and the Room of Ancient Rome have stunning friezes.  The Room of the Four Continents prominently displays stucco figures of America, Africa, Asia and Europe above the entrances. Frescoes take on historical themes, such as Aristotle mentoring a young Alexander the Great in geography. Allegorical statues also add eloquence to the space. 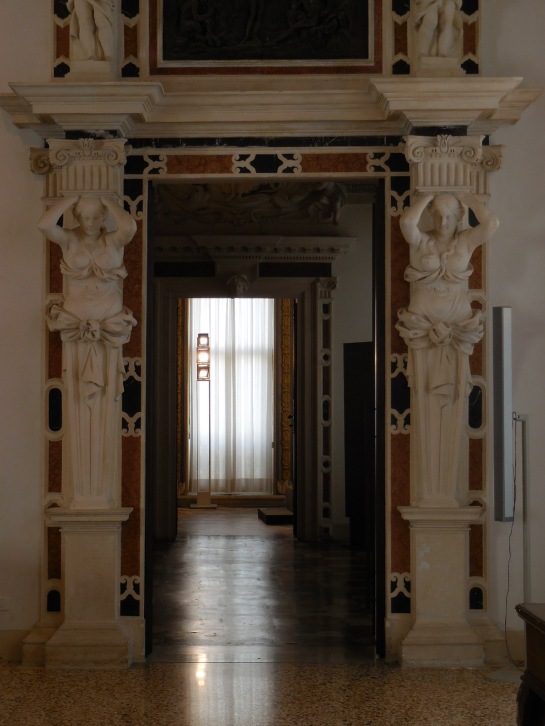 The Gallery of Truth is the room that most amazed me. I could not look away for a long time, as I was so mesmerized with the stucco and fresco decoration that covers the entire ceiling. The central fresco celebrates the triumph of truth. Nine muses are represented, too. Putties and garlands abound, and grotesque creatures join in the exuberant fray. The paintings show the feats of Hercules. In this room, I saw him slaying serpents, freeing Prometheus from the rock and holding up the world for Atlas.

While ceramics are not usually my cup of tea, this collection did feature an impressive 500 items, many unearthed in Ruvo di Puglia, a town in Puglia I had visited the previous year and one of the most tranquil places I had ever seen. It brought back memories of that astounding trip to Apulian Romanesque churches and tranquil settings without hordes of tourists. Puglia had given me a sense of serenity and a feeling of peace. I was reminded of those feelings, as I better comprehended the ancient history of Ruvo di Puglia. 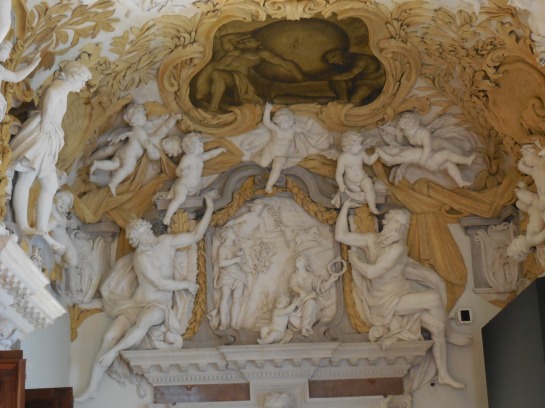 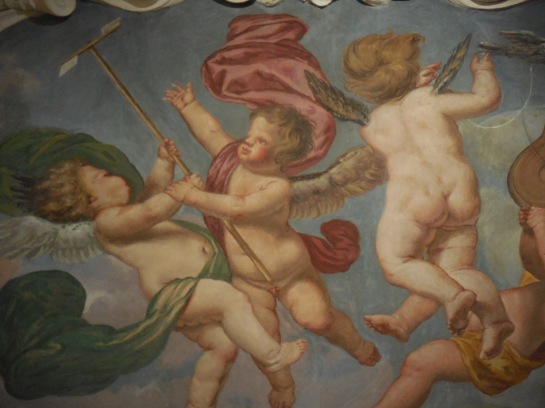 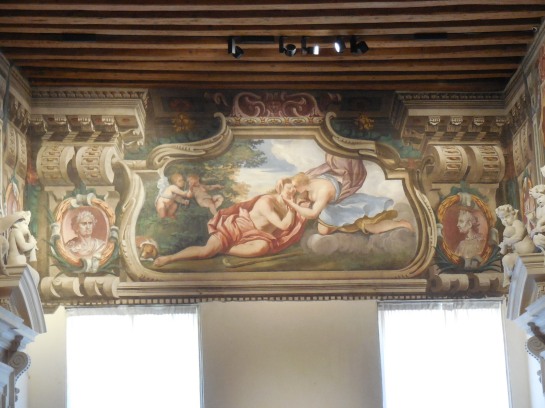 The 18th century Venetian paintings brought back memories of my trip to Venice, just one of many places in Italy to which I longed to return. The 14 paintings of everyday life in the society of the Venetian nobility by Pietro Longhi triggered thoughts of a Prague exhibition of works by Rococo painter Norbert Grund, who was a masterful observer of his era. Yet Longhi did not only paint common scenes. I also admired his portrayals of exotic animals surprising and enthralling an audience. 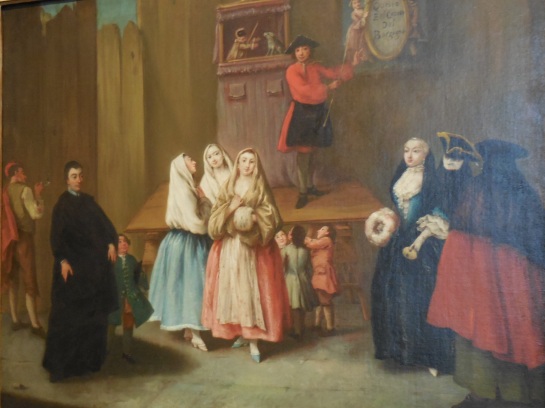 I was entranced with the works of Canaletto and his contemporaries. The Venice landscapes spoke to me. I recalled the exhibition of Canaletto’s works I had seen in Aix-en-Provence a few years earlier. I also thought of the Canaletto painting that I had admired in Nelahozeves Chateau and later in the Lobkowicz Museum in Prague.

In a room punctuated by stucco decoration, I admired the unique sculpture “The Fall of the Rebel Angels” by Agostino Fasolato, created in the 18th century. Shaped as a pyramid, the sculpture features 60 intertwining figures, all twisting and turning, carved from one piece of Carrara marble. Once on display in Padua, the plethora of figures exhibit a great attention to detail as masterful as that in paintings by Pietor Brueghel the Elder. I was entranced with the dynamic sense of movement attained by the sculptor. The sculpture, indeed, seemed to be in motion as figures wiggled and writhed. 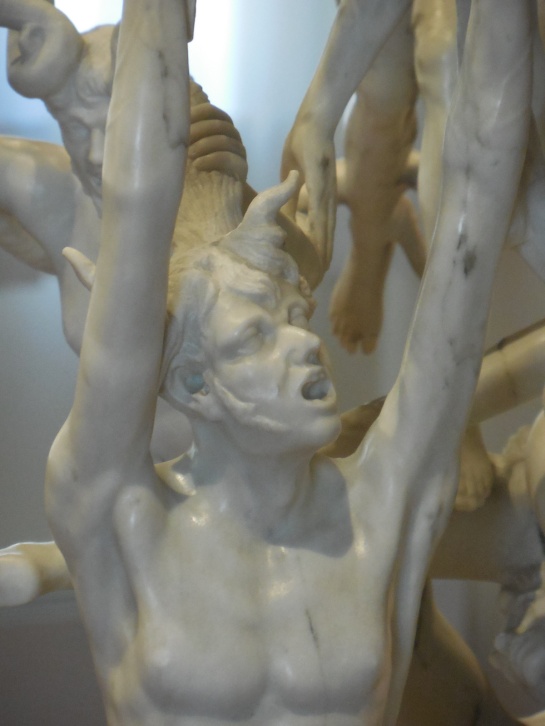 The Russian icons enthralled me so much that I was just as astounded by this gallery as I was by the comprehensive Van Gogh exhibition at the Palladian Basilicata with its elegant arches and arcades. At this gallery I saw 140 icons ranging in age from the Middle Ages to the 20th century and giving a superb overview of the history of the icon in Russian society throughout the centuries. 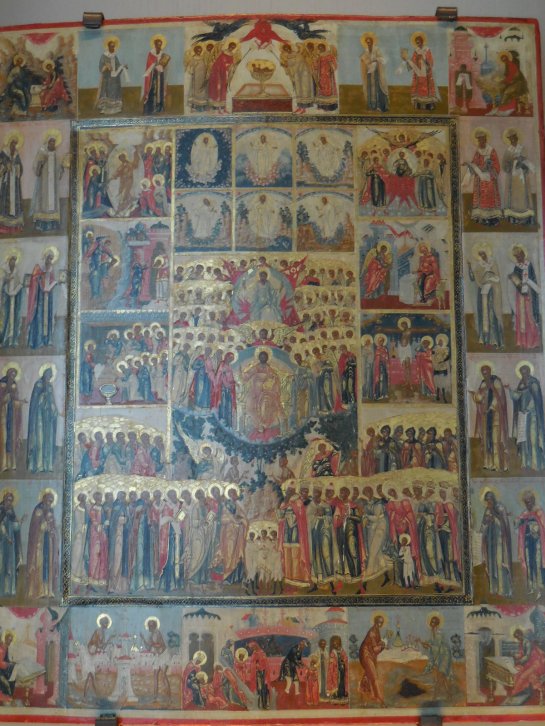 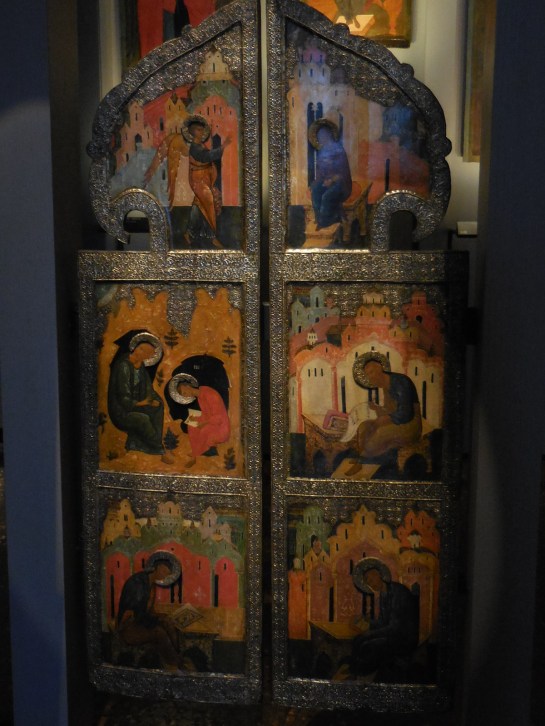 The icons boast various themes. They are inspired by the Bible, legends, liturgical hymns, theological texts and feasts, for instance. The Mother of God and Saint Nicholas are featured in some of the artistic creations. Icons of saints and monks, some with monasteries in the background, make many appearances. I also saw frames and covers for icons made with precious materials. A mastery of the goldsmith trade also is illustrated in some items. The schools represented include Moscow, Novgorod and Vladimír. The icons are organized by subject matter, which was helpful and intriguing. 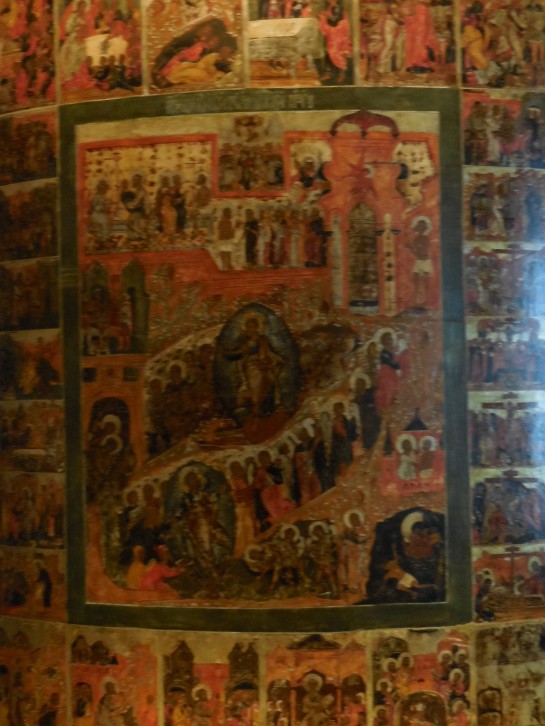 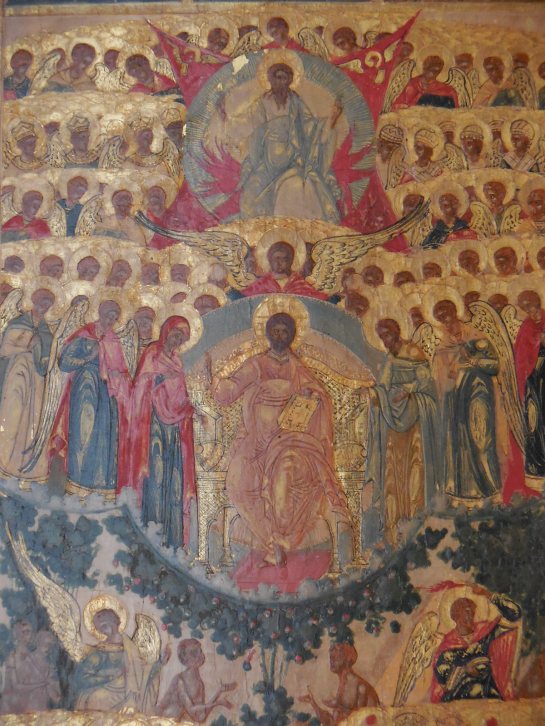 I also found the temporary exhibition of Soviet icons by Grisha Bruskin to be very impressive. A monumental painting called “The Fundamental Lesson,” created in 1945, features 256 white figures. The painting stresses the significance of statues in the Soviet Union as each person represented has an ideological meaning. Instead of a celebration of saints, Madonnas and monks, I saw workers, pioneers, athletes, functionaries, astronauts, soldiers and doctors exalted onto ideological pedestals. Small sculptures of these figures are also displayed. There are 25 porcelain pieces and 49 renditions in bronze. 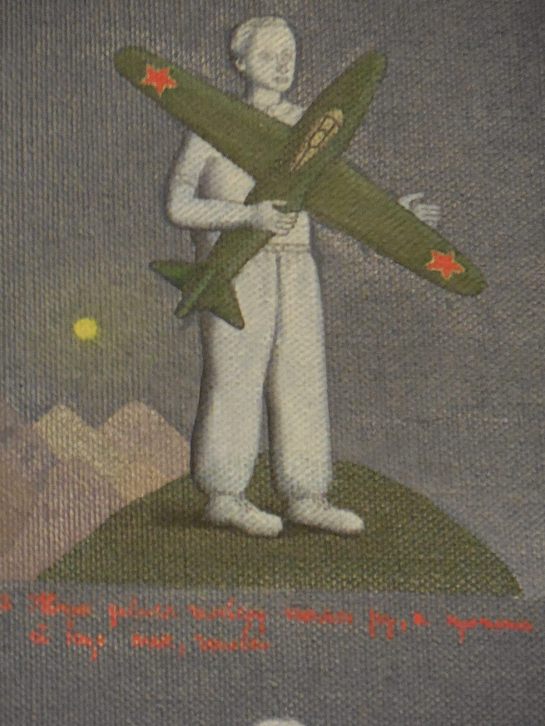 I remembered how, as a child growing up in America, I had been taught by society that Russia was the enemy, all Communists were bad people, and everything was black-and-white. Russia was evil, we were good. I had wondered what life was like in a Communist country. Did people ever cry with joy or truly feel happy and at peace with themselves and with the world? I wondered what people ate, what people wore, what people were thinking about. 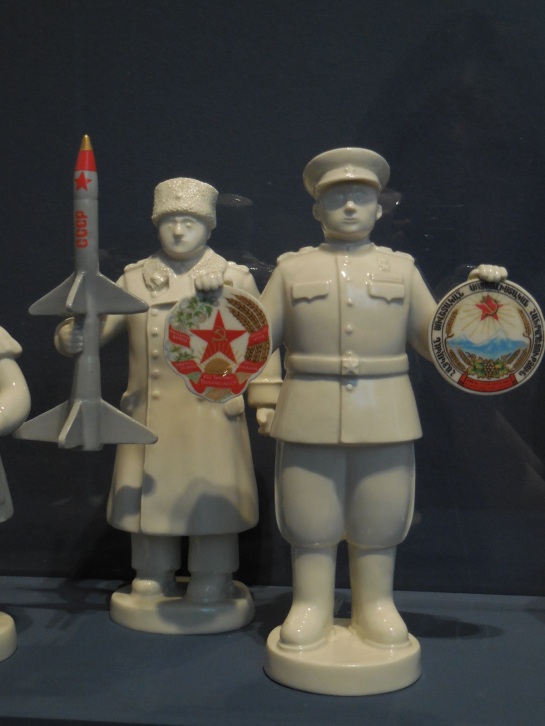 Overall, I was most impressed with this exhibition because it exposes the dangers of Soviet ideology. It impressed upon me how Soviet society had been inundated by the ideological myths represented by the painting and small statuary. 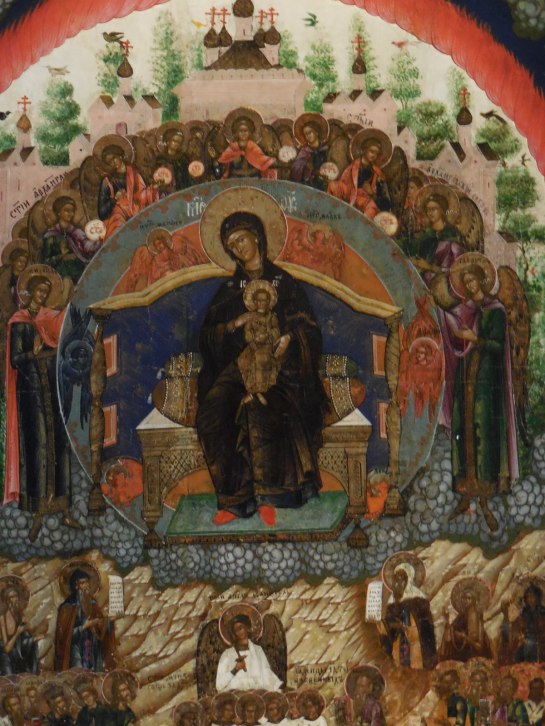 I came away from this gallery with a heightened appreciation of having grown up in a free, democratic society. I had attained a deeper understanding of the art of Russian icons. I had seen a unique sculpture carved with precision. The visit had triggered golden memories of Venice. I had examined Venetian society in the 18th century thanks to Longhi. I had seen artifacts from one of my favorite Apulian towns, Ruvo di Puglia and had thought about that unforgettable trip. I had experienced all this in a building that was a masterful work of art, the Gallery of Truth being my favorite space.