I had visited Sychrov on two occasions. The Neo-Gothic façade never failed to captivate me. The exterior was so impressive, and I knew very well that the architecture and furnishings of the interior were just as stunning. Still, this time would be different from my previous visits because I was going on Tour B as well as Tour A. Tour B focuses on rooms decorated as they were during the First Czechoslovak Republic of the early 20th century and is only offered in July and August. Tour A takes visitors back to the end of the 19th century. While I was waiting for Tour B to begin, I studied the coats-of-arms painted on the walls facing the courtyard of the chateau and earnestly took photographs. 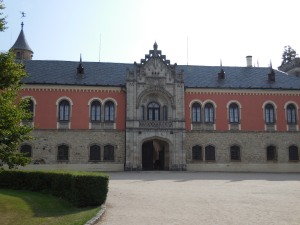 I was already familiar with the history of the chateau, which had been owned by the Rohan clan of French origin for 125 years. Let’s start at the beginning: The village harkened back to the 14th century. A fortress was built there in the following century. The chateau, however, came into existence at the end of the 17th century, when French knights called the Lamotts of Frintropp erected a small, Baroque chateau with a high tower and park.

The Rohans had to leave France after the French Revolution. Austrian Vice Marshall Charles Alain Gabriel Rohan bought the chateau in 1820, and the family’s more-than-a-hundred year tenure would make the chateau the gem it is today. The Rohan dynasty hailed from the 10th century and got their name from a town in Brittany. It is said that their ancestors even went back to the founder of Brittany, Conan Meriadoc. Prestigious members of the Rohan clan included four cardinals serving as Bishop of Strasbourg during the 18th century. Other Rohans had enjoyed political and military success, too.

Henri, known as Duke of Rohan was successful as a writer as well as a soldier. His memoirs are considered to be one of the best by French nobility during the 16th and 17th centuries. He also penned descriptions of his travels and also published a historical account of war. As a soldier he was a leader of the Huguenots and also played a role in the Thirty Years’ War.

One member of the family even appeared in two of Alexandre Dumas’ novels – The Three Musketeers and Twenty Years After. Marie of Rohan, also referred to as the Duchess of Chartreuse, had befriended the queen of France. She was blamed for the queen’s miscarriage and was subsequently banished from the court. Then she initiated many conspiracies against France. Exerting her political influence, she even encouraged foreign powers to take stances against France. An opera has been written about her, and several books about her life have been published. 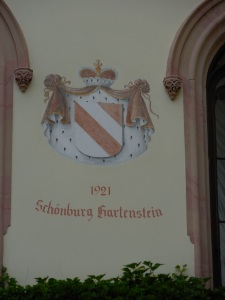 The Rohans made many changes to the Baroque structure, transforming it into Classicist style. During 1834 and 1835 French King Charles X and his family resided there. The king had been forced to flee from France after the July Revolution in 1830, triggered by the four ordinances he put into effect. He began censoring the press, dissolved the newly elected chamber, made changes to the electoral system and demanded new elections in September of that year. First, journalists revolted and then many others joined them. During the winter of 1832 and 1833, the king in exile lived in Prague Castle, a guest of Habsburg Emperor Francis I of Austria. He is buried in a family crypt at Kostanjevica Monastery in Nova Gorica, Slovenia.

The chateau would undergo more changes. From 1847 to 1862, during the tenure of Kamil Josef Philip Idesbald Rohan, Sychrov became an architectural jewel in Neo-Gothic style, flaunting many romantic elements. In the 1850s the façade took on a Neo-Gothic appearance, and the two main chateau towers, the Austrian or Rohan Tower and the Brittany Tower, were built. One of the architects responsible for the Neo-Gothic designs was Bernard Grueber, who had also worked his magic on Prague’s Old Town Hall, Orlík Chateau and Blatná Chateau. 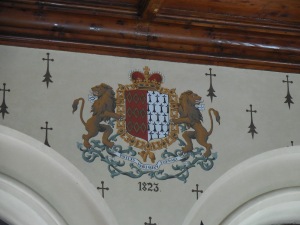 This period proved to be Sychrov’s golden age. After this architectural transformation, Habsburg Emperor Franz Joseph I visited the chateau, and his son, Crown Prince Rudolf, stayed there twice. The last Rohan owners were Dr. Alain Rohan and his Austrian wife, Margarita. They had five daughters, one of whom died young.

Because he had taken German citizenship, Dr. Alain Rohan lost the chateau, according to the Beneš’ decrees instigated by Czechoslovak President Edvard Beneš. I was fascinated by the tour guide’s tale of how the seven Rohan women fled from Sychrov. When the Russians came to the chateau, the seven Rohan women crawled on the floors, so the Russians would not see them. Then they fled one night to Prague. From Prague they continued to Austria. In 1945 Dr. Alain Rohan was arrested, and his wife Margarita was told that he was dead. But he wasn’t. In reality, he walked from Dresden to Austria. It sounded like a plot for a Dan Silva novel. That same year the chateau was nationalized, and during 1950 six rooms were open to the public. More reconstruction took place later that century and during this century, too.

Soon it was time for Tour B to begin. First, we entered the Assumption of the Virgin Chapel. I was captivated by the main altar, made out of Carrara marble. Antonín Dvořák had played on the Neo-Gothic organ here. He often traveled to Sychrov to meet with his friend, the chateau’s caretaker. The pulpit was decorated with paintings of the four Evangelists and their attributes. The adornment of the stained glass windows focused on the life of the Virgin Mary. I noticed a rendering of the Annunciation in one window. The exquisite benches were made by carver Petr Bušek, who spent almost 40 years decorating the chateau with wood paneling, wooden ceilings and wooden furniture pieces during the 19th century. Also, two plaques commemorated the visits of Franz Joseph and Crown Prince Rudolf.

We walked down a hallway where there were pictures of 19th century German soldiers in various uniforms. Then we entered a room filled with snapshots of the trips that Dr. Alain and Margarita had taken. I saw them on a ship, traveling from Milwaukee, Wisconsin to New York and I saw them in Egypt, India and Italy. I saw pictures of them on horseback and on the tennis court that once was in the chateau park. In another photo they were skiing. 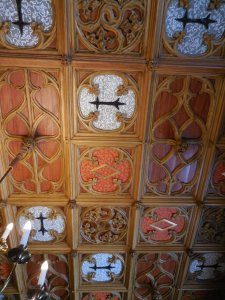 Then there were pictures of their five daughters, one of whom died young. In one photo the children were wearing masks, dressed in costumes while playing theatre. Five young girls were gathered on the roof of a cabin in a park. One photo showed a fat donkey named Muki. Yet there were not only pictures of the family in the room. When the family emerged from bad car accident unscathed, they wrote a thank you letter to the Pope. The Pope’s answer was on display.

I liked the room decorated with photos of the family. The owners and their children were no longer only names listed in the history of the chateau. They were real people who enjoyed traveling, playing tennis and skiing. I saw pictures of the daughters, happy and content. When I looked at the pictures from their travels, I thought about the valuable insights I had gained while traveling and how the act of traveling had made me a better person – the experiences had helped me grow as a person. As I learn about a new place, I learn about myself, too.

Another space was shaped like a Turkish tent. The Rohans collected military tents, armor and weapons. Pictures showed the area surrounding the chateau at the end of the 19th century and the interiors as they had looked during that time period.
We entered a room with a staircase, and I was captivated by the richly decorated wooden ceiling, the masterful work of Petr Bušek. The hallway sported graphics of historical themes and mythology.

Next was Tour A, which depicted the chateau as it had been in the second half of the 19th century. We came to Staircase Hall with the impressive statue of Jindřich (Henri) from Rohan, armed with a sword, with one hand leaning on the scabbard, celebrating his military successes. He had a small, pointy beard and mustache. Then we got our first taste of the Rohan portrait gallery, which included 242 portraits of French origin, mostly of the Rohan family but also of French kings and queens. It was the biggest collection of French portrait painting in Central Europe. The first portraits were made in the 16th century. In the Royal Apartment reserved for guests, there were portraits of French kings. We also saw the Neo-Gothic bedroom where Emperor Franz Joseph and Crown Prince Rudolf had slept. The bed looked small.

Kamil Rohan’s study focused on botany, one of his hobbies. On his desk was a book about herbs, a globe and microscope. A large book about herbs from the first half of the 19th century was on a stand at one side of the room. The book contained handwritten drawings. I wished I could turn the pages and look at all the drawings closely.

In the Yellow Salon, used for unofficial visits, three yellow vases got my attention. I loved the color yellow because it looked so cheerful. It reminded me of my mother, always the optimist. We saw a narrow, spiral wooden staircase with rich woodcarving designs by Bušek from the 1850s. What masterful woodwork! It reminded me of the spiral staircase at Lednice Chateau, also Neo-Gothic in style, in south Moravia. I also gazed at paintings of the Rohan ancestors from the Middle Ages. Because the Rohans did not know what these ancestors had looked like, Czech painter Karel Javůrek used his imagination when rendering the portraits. In the Blue Cabinet there were exquisite figures of Viennese and Meissen porcelain. A black jewel chest with gemstones decorating the drawers got my attention, too.

The Fireplace Room was impressive as was the Reception Room, which featured rich wood paneling and an impressive wooden ceiling. More impressive carving by Bušek! The library held about 7,000 books, including 1,614 prints dating before 1800 and a manuscript from the 15th century. A folding leather chair caught my eye, too. The Prague Salon featured authentic leather wallpaper. The Big Dining Room looked a bit like a Knights’ Hall from the Middle Ages. It featured large portraits of Rohan owners. In one portrait Kamil Rohan looked suspicious of the photographer. I loved the wooden chairs with the “R” gold monograms and richly decorated backs.

After the tour I walked through the park and took a seat outside at the Neo-Renaissance Orangery, from which I gazed at the chateau and admired its two-arm monumental sandstone staircase. The park covered 26 hectares, and included many kinds of woody plants thanks to Kamil Rohan and his interest in botany. The many kind of trees included Dawn Redwood and oak-leaf beech. I had a piece of tasty cake and a cup of cappuccino. I reflected on how enriched my life had been thanks to travel and how grateful I was to have the opportunity to travel. In my mind I saw the photos of the Rohan family on their trips and wondered how travel had enriched their lives. I had lunch in the chateau restaurant, sitting outside on such a sunny day.

Then it was time to head back to Liberec, where I would get a bus to Prague. Sychrov had more than lived up to my expectations. I felt as if I had personally known Dr. Alain Rohan and his family thanks to the snapshots. The Neo-Gothic façade and interiors did not disappoint, either. What a skilled craftsman Petr Bušek had been! I loved the woodwork, especially the wooden ceilings and wood paneling. Again, it reminded me of Lednice Chateau, also one of my all-time favorites. Sychrov was certainly one of the most impressive chateaus I had seen.