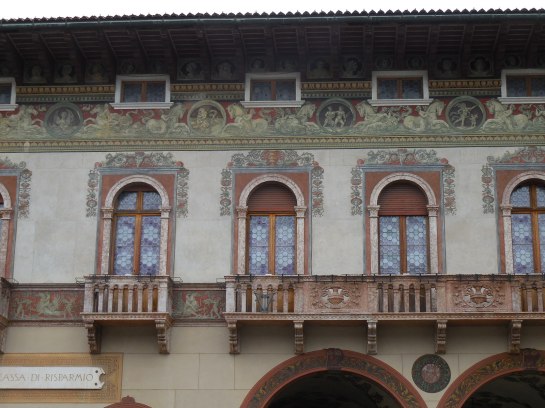 A building in Rovereto, one of my favorite places I discovered this past year

For me 2018 will always be associated with Palladian villas and the Veneto region of Italy, the excitement of Berlin and remarkable Czech sights. I also visited some unforgettable art exhibitions in Prague and elsewhere in Europe. 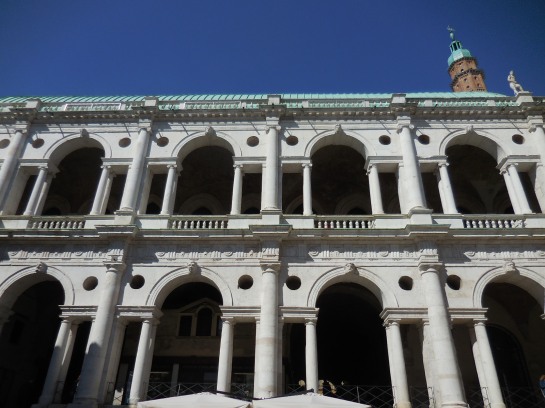 During March I traveled with a friend via the arsviva agency to the Veneto to see Palladian sights and other architectural gems in Vicenza, Padua and Rovereto. The three cities were fascinating, each with its own unique character. I was especially drawn to Vicenza for the Teatro Olimpico, Palazzo Leoni Montanari and Palazzo Chiericati. Of course, I admired the elegant arches and arcades of the Basilicata Palladiana. 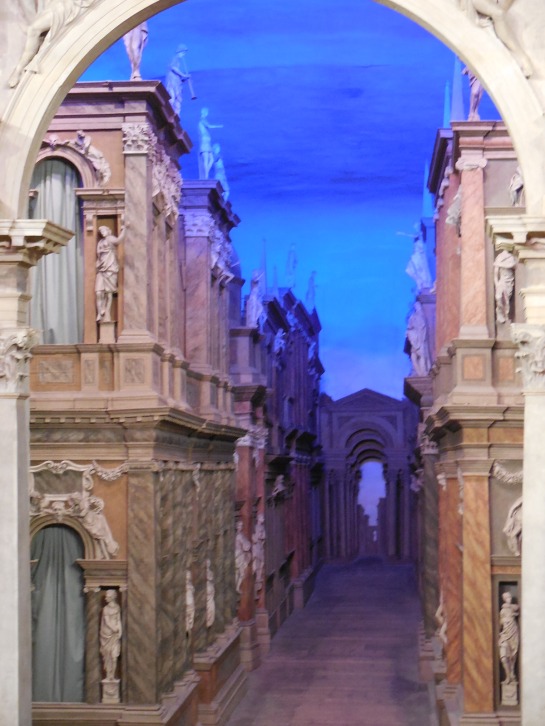 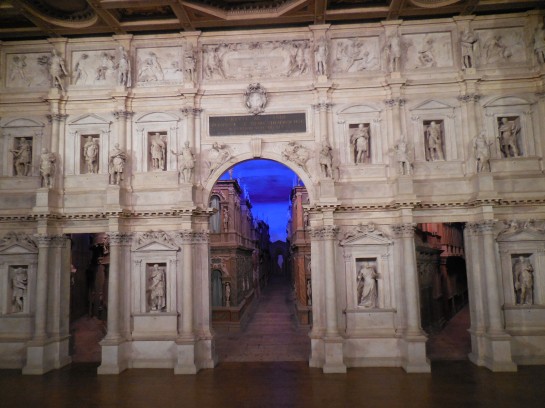 The highlight of my tour of Palladian architecture was the Teatro Olimpico, one of only three Renaissance theatres in existence. Palladio’s plan was based on classical architecture. I most admired the illusive architecture in the set for Oedipus Rex, the oldest existing theatre scenery, which featured painting with a false perspective. It looked as if the seven roads of Thebes led from the stage into the horizon. Also, it was difficult to fathom that the clear sky was really painted. The illusion seemed so real.

A Russian icon in the Gallerie d’Italia

I cherished my time in the galleries of Vicenza. The Gallerie d’Italia was decorated with rich statuary, stucco ornamentation and frescoes. It houses 18th century Venetian painting, a unique 17th century sculpture made of Carrara marble and vases from Attica and Magna Graecia. However, the highlight of the gallery for me was its superb collection of Russian icons. I had only seen more intriguing collections in St. Petersburg. 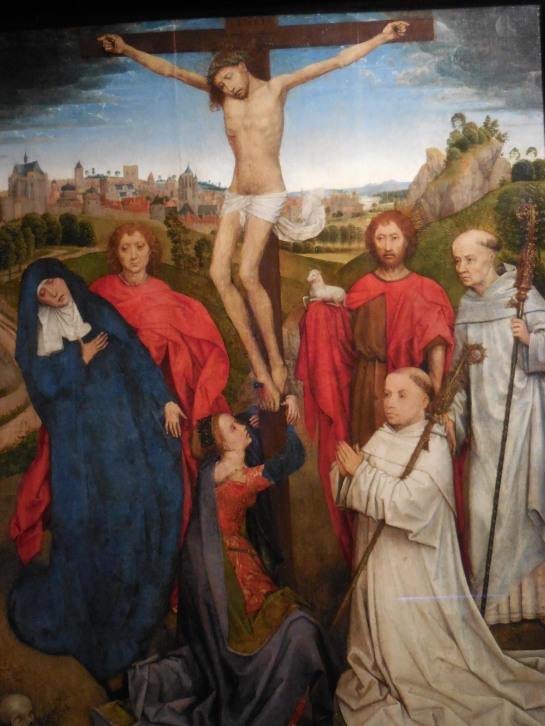 The interior of the Civic Museum

The Civic Museum in the Chiericati Palace also caught my undivided attention. The palace itself was a work of art, designed by Palladio in 1550 with frescoes and stucco adornment decorating the interior. The art spanning from the 1200s to the 20th century was incredible. 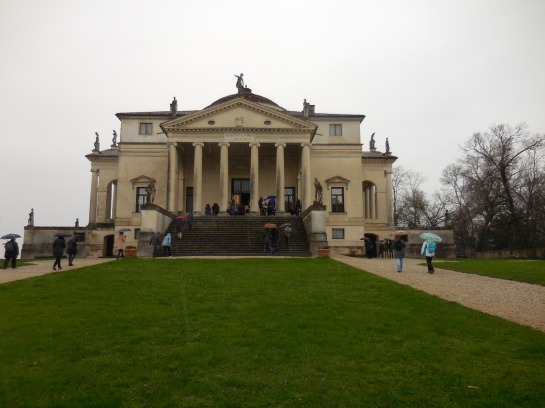 Villa Rotunda – no pictures allowed inside

I also saw some Palladian villas, including La Rotunda, which inspired Thomas Jefferson in his design of his home at Monticello. The exterior’s appearance is that of an antique villa. The geometric design connects the sloping portico roofs with the ribs of the dome. The geometric interior was planned for comfort and beautiful views. The rooms are organized around a central hall with a dome. The villa has three floors and a mezzanine.

In Padua I gazed in wonder at the Basilica of Saint Antonio, which is huge with eight cupolas. The interior has a Latin cross pattern with three naves separated by pilasters. The various chapels were outstanding. The Chapel of Saint Giacomo, hails from the 14th century with six columns of red marble included in the décor. The work, “The Crucifixion” is divided into three parts on the walls. Pictures on lunettes narrate the life of Saint Giacomo the Great.

The main altar of the basilica was created by Donatello. The pictorial narration of the altar includes four miracles of Saint Antonio, sculpture of the Crucifixion, Madonna with Child and the figure of Saint Antonio, for example. The Chapel of the Saint includes the tomb of Saint Antonio. On the walls are nine reliefs of marble figures recalling miracles performed by Saint Antonio. There was so much to see, a person would need a few days to do this place of worship justice. 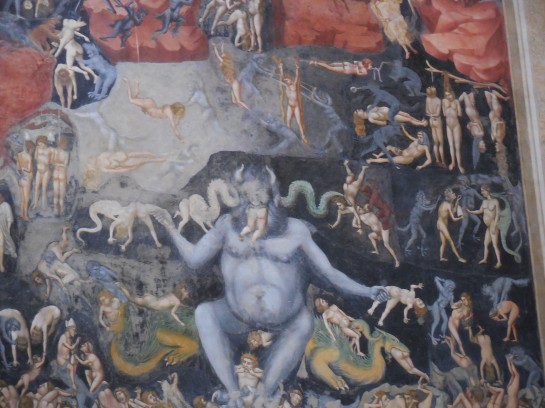 I also was enthralled with the Scrovegni Chapel, which featured amazing 14th century frescoes by Giotto di Bondone. Thirty-eight panels of frescoes cover three walls on three levels. I was flabbergasted, staring at each fresco in a trance.

From the Depero Futurist House of Art, by Fortunato Depero

I was very impressed with Rovereto, a picturesque town below the Dolomites. Its charming, narrow streets and squares cast a magic spell on me. I visited the Depero Futurist House of Art, the only Futurist museum in Italy, featuring the works of Fortunato Depero, a painter, sculptor, writer and graphic designer. I learned that Futurism rejected the past and celebrated modernity as well as technological advances. The museum included furniture, painting, tapestries, cloth material, drawings, collages, posters, toys and a film. I loved the vibrant colors of many of the works.

In May I spent five days in Berlin, a city I had not visited since 1991 except for a one-day visit to the Gemaldegalerie several years earlier. The East had undergone radical changes since then, to say the least. Most of the Wall is gone. The former Communist section of the city is lively with bars and restaurants and includes most of the main sights. Now a Dunkin Donuts and Starbucks greet visitors past the Brandenberg Gate. Back in 1991, the difference between East and West Berlin was almost tangible, the East being gray, depressing and drab.

The Memorial to the Murdered Jews of Europe 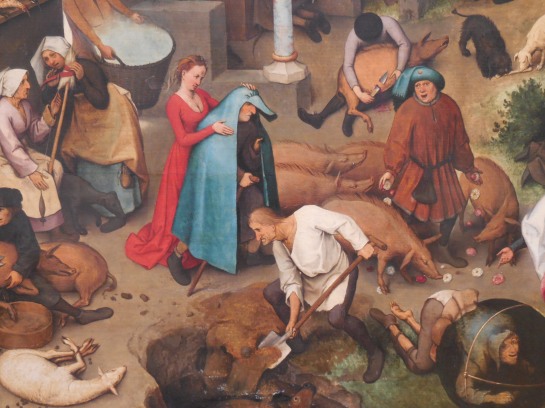 Pieter Bruegel the Elder in the Gemaldegalerie

Once again I inspected the art ranging from medieval days to Neoclassicism in the Gemaldegalerie. I was very moved by the 220 meters of original Berlin Wall at the memorial on Bernauer Strasse. Berlin’s Cathedral impressed me a great deal with the eight mosaics decorating its dome. I had a tour of the Reichstag’s glazed dome, a superb structure of modern architecture soaring 47 meters. The Memorial to the Murdered Jews of Europe greatly moved me with its 2,711 concrete blocks of equal size but different heights. The DDR Museum with its multimedia exhibits gave me an idea of what life was like for East Germans under Communism. The Old National Gallery bewitched me with its 19th century art collection, and the temporary exhibition Wanderlust featured 19th century landscapes with travelers on foot. I particularly liked the pictorial renditions of Naples and places in Sicily. I saw the Ishtar Gate and a building from Aleppo in the Pergamon Museum, for instance. The Museum of Decorative Arts was a treasure, too, with amazing exhibits in fashion, design and object art from the Middle Ages through Art Deco.

Plague mask worn by doctors in the German Historical Museum

What impressed me the most was the German Historical Museum, where I spent a good part of two days. Encompassing 2,000 years of German history, the museum takes the visitor from the reign of Charlemagne to the departure of the Allies in 1994 by presenting historical facts, personalities and events and by portraying everyday life in the various eras. I especially liked the plague mask worn by doctors treating patients with this disease. Made of leather, it had a long beak and looked as if it belonged in a commedia dell’arte play. The section about World War II was especially gripping. The Germans were certainly facing that horrific part of their past head-on in this museum.

When my parents visited, we toured the dazzling Rudolfinum with its beautiful Dvořák concert hall. President Tomáš G. Masaryk was elected in that building on three occasions, when Parliament had met there during the First Republic. I visited the lovely and vast Botanical Gardens in Troja, examining the southern part and the greenhouse. The views of Troja Chateau from the gardens were unbeatable. 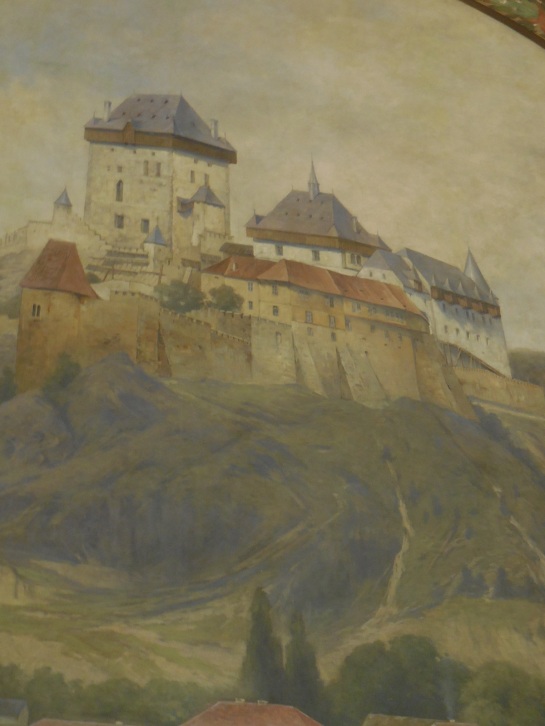 Shortly after it reopened after a seven-year renovation, I spent time in the National Museum of Prague. The exhibition about Czech and Slovak relations during the past 100 years and life under Communism was outstanding. The permanent display also was captivating, but the place was so crowded. A Neo-Renaissance gem, the National Museum features amazing sculpture, painting and architectural elements. I especially liked the pantheon, where paintings, statues and busts celebrate Czech culture and history. The four paintings of castles in Bohemia impressed this avid castlegoer. I also explored the Hanspaulka, Ořechovka and Baba sections of Prague with their distinctive villas.

Out of Prague I made my way back to Osek Monastery below the Krušné Mountains, established in the 13th century. The Chapter Hall was one of the first Gothic buildings erected in the Czech lands while the interior of the church takes on a Baroque appearance. Hořovice Chateau is much younger, hailing from the late 17th century. The Late Baroque décor includes a fantastic ceiling fresco in the hall of the main staircase. The Large Dining Hall amazes with Second Rococo adornment. Horšovský Týn Castle and Chateau offers six tours; we had time for two. Established in the 13th century, it includes an 18th century pool table with its sides decorated in tortoiseshell and intarsia. A Rococo jewel case and Holland Rococo display case caught my attention, too. The Italian vedutas of Venice made me long for that Italian city. The 18th century Dancing Hall features four big wall mirrors and a 28-branch chandelier made of Czech glass. Ceiling frescoes also captured my interest. However, the original Gothic portal at the entrance to the chapel was the most outstanding architectural feature. The chapel was magical, too. Velké Březno, one of the youngest and smallest chateaus in the Czech lands, also amazed.

I also spent time in museums this past year. In Vienna I saw the excellent Monet exhibition as well as the Pieter Bruegel the Elder exhibition. Both captivated me. In Prague the exhibition showcasing the various collages of Jiří Kolář was an art highlight. The exhibition about Czech and Czechoslovak history in the Riding School of Prague Castle was unforgettable. There were many more art-related highlights, but I do not have time to mention them all.

From Czechoslovak Exhibition at National Museum, cash register from beginning of 20th century