During 2017, I went on a walk through the Ořechovka section of Prague with Praha Neznámá or Unknown Prague tour company. The guide was excellent, the tour comprehensive. If you speak Czech, I recommend discovering parts of Prague with this agency. However, it was far from my first visit to the area. 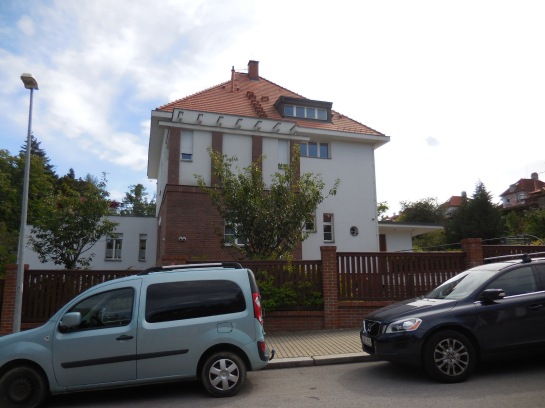 The villa-dotted Ořechovka quarter of Prague’s sixth district is one of the most picturesque parts of the city. For years, I have loved taking walks through the area, admiring the various styles of architecture. Some centuries ago, the property belonged to Jan Kryštof Bořek, who had a superb chateau built in a French style garden that was dotted with sculptures. The chateau was destroyed in wartime during 1742. The land was later used for other purposes, and, after Czechoslovakia was born in 1918, the first villas were constructed there thanks to architects Jaroslav Vondrák and Jan Šenkýř. The duo was especially inspired by English garden towns. The villas often consisted of apartments, from one-room accommodations to flats of four rooms. Many prominent artists settled in Ořechovka. 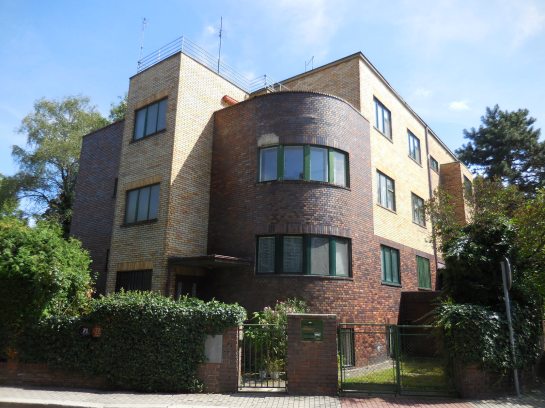 The villas that intrigued me the most were the ones designed by Czech modernist architect Pavel Janák, whose creations include the functionalist plan for the Baba Housing Estate, also in Prague’s sixth district. He designed three of the 32 houses in Baba. Janák also drew up the plans for reconstruction work at Prague Castle and made innovative Cubist ceramics. His Kafka Villa – no, it has nothing to do with Franz! – was constructed for sculptor Bohumil Kafka whose works include the Monument to Jan Žižka in Prague’s Žižkov district. That sight ranks as the world’s largest equestrian statue. Inspired by the works of Auguste Rodin, Kafka favored symbolism and secession. Situated at 41/484 Na Ořechovce Street, this villa combines various styles as I noticed features of symbolism, naturalism and impressionism. It also is adorned with a superb Art Nouveau sculpture.

Janák also cast his magic spell with the villa for painter Vincenc Beneš, a painter influenced by French modernism as well as Cubism and Fauvism. Later works included stylized figural creations and battlefields as well as landscapes for the National Theatre. Located at Cukrovarnická 24/492, this house flaunts a distinctive Dutch style and features coarse brickwork that appealed to me. (The villa for painter, graphic artist and illustrator Václav Špála also is dominated by the Dutch style that shows off coarse brickwork, though it was not designed by Janák.)

The third villa that Janák contributed to Ořechovka consists of two villas together, built for Cubist painter, graphic artist and sculptor Emil Filla and his father-in-law, psychologist, philosopher and politician František Krejčí, in the 1920s. The structure of these villas is similar to the Beneš Villa.

Filla’s story is intriguing. Inspired by Picasso, Braque, Munch and Van Gogh, he was noted for his Cubist painting and sculpture. Before World War I, he traveled to Paris and then fled to the Netherlands when war erupted. After the war, he came back to Prague, and traits of surrealism could be found in his works, which included painting on glass. On the first day of World War II, he was arrested by the Nazis, along with other prominent Czechs. He spent time in several concentration camps during the war, but somehow survived. After the war Filla took up teaching at Prague’s Academy of Arts, Architecture and Design and created mostly landscape paintings.

My favorite street in the quarter and also my second favorite street in Prague – my favorite is a short, dead-end street in Prague 6, where I lived for 10 happy years – is called Lomená Street. The design of the 1920s townhouses by Vondrák and Šenkýř resemble English cottages. They are so quaint and have an intimate atmosphere that immediately makes me feel calm and at ease despite the world’s turmoil and with my own problems, be they big or small. I love the triangular gables. Other characteristics are narrow, rectangular windows and high chimneys. 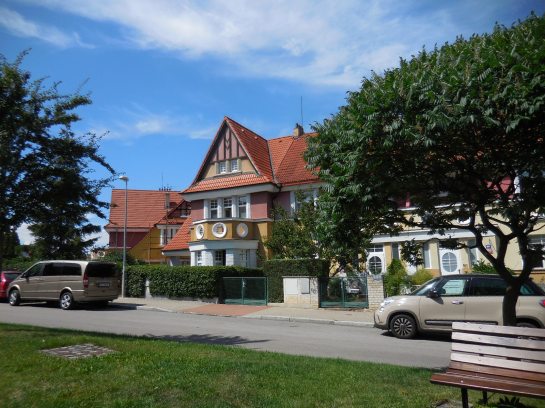 Another one of my favorite places in Prague is the Rondocubism triangular area made by Dělostrelecká and Klidná streets. Similar to Art Deco, Rondocubism is unique to the Czech Republic. Janák paired with fellow architect Josef Gočár to create works in this nationalistic, folk-inspired style. The bright colors make the homes even more lively and dynamic. I like to imagine the time period when these townhouses were constructed, a few years after Czechoslovakia had been christened a new country in 1918. So much hope and positive energy was in the air. I would not mind calling one of these architectural gems home.

Now the main square of Ořechovka is depressing and dilapidated with only a few small shops, but back in 1926, when it was completed, the central building featured not only shops but also a cinema (which was only recently shut down), restaurants, a café and doctors’ offices. In 1927, the building was extended with a theatre, dance hall and library. I remember seeing the film Kolya, which won an Oscar in 1996 for best foreign film, at the small, intimate movie theatre there. The movie directed by Jan Svěrák and starring his father, Zdeněk, remains one of my favorite films. Back in the late 1920s, the square must have been quite the gathering place, bustling with activity and excitement.

There is another reason Ořechovka is dear to me. Back in the 1990s, when war was causing havoc in former Yugoslavia, I was teaching English to two girls, a 9-year old and an 11-year old, living in Ořechovka. They resided in a beautiful townhouse resembling an English cottage. Their father worked for the Czech Embassy in Belgrade, but the children and their mother had been sent back to Prague because it was deemed too dangerous for them in Belgrade.

The late Václav Havel, president of Czechoslovakia and the Czech Republic for 13 years, resided in the villa pictured above. His widow still lives there.

I have not taught many children. I had previously taught only two youngsters. I do not have any children and do not understand them well. However, these two girls opened their hearts to me. They were such kind and decent people, obviously influenced by their mother, who was a wonderful human being. I looked forward to the lessons because it was so pleasant to teach them. Moreover, with each lesson, I learned a little better how to communicate with children. I remember they loved learning about the US presidents. I had flash cards, one for each president, and we used to create games with them. Therefore, Ořechovka is a place I associate with genuinely good people who have influenced my life. I often wondered what ever happened to those girls. Are they living in Prague or abroad? Do they have families? Did they keep up with their English studies? 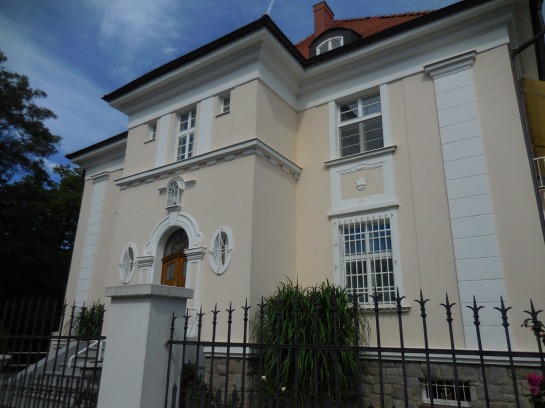 This villa was once the home of high-ranking Nazi Adolf Eichmann.

Unfortunately, not only good people have called Ořechovka home. The most evil person to live in the quarter was Adolf Eichmann, who took up residence in a neoclassical villa that had belonged to Jew Rudolf Fišer. Eichmann fled in April of 1945, and the previous owner was allowed to return to the villa but only to rent a few rooms. 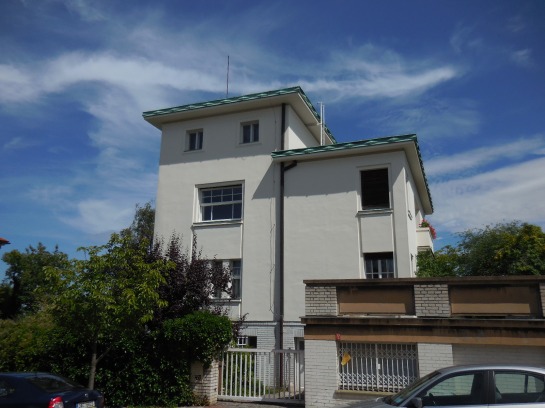 Ořechovka remains dear to me, and I love taking walks there whenever weather permits. Along with Hanspaulka, it is one of my favorite parts of Prague. I recommend travelers take walks through these villa-dotted quarters in order to get out of the crowded center and experience a more tranquil side of Prague.