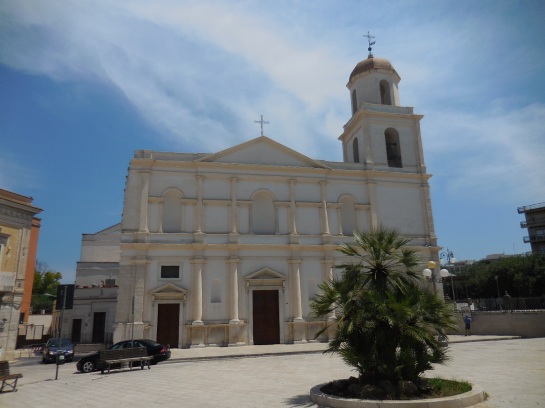 The Cathedral of Saint Sabinus

When I think of Canosa, this is what immediately comes to mind: the cathedral, archeology and Bohemund. A quiet yet dazzling city, Canosa can trace its history back to the seventh millennium BC, if not farther. Its name most likely derives from the word “cani,” which means dogs.

Canosa’s relationship with the Romans went through drastic changes. In 216 BC, when Hannibal defeated the Romans in the battle at Cannae – I saw this battlefield as well – the Romans were allowed to take refuge in Canosa. Later the city joined the opposition in a revolt against Rome. Then, under the guidance of Marcus Aurelius, Canosa achieved the status of a Roman colony.

In 3 BC the city’s production of pottery received accolades. At that time, Canosa flourished as a rich city that minted its own coins. Construction thrived – many temples and thermal baths were built as well as an amphitheatre. An aqueduct was erected in 141. Canosa became a bishop’s seat under the Byzantines, but then was destroyed.

Under Norman rule, Bohemund of Antioch, whose original name was Bohemund d’Hauteville, took charge and revived the city. He held the titles of Prince of Taranto from 1089 and Prince of Antioch from 1098 until his death in 1111. This hero of the First Crusade gave the city treasures he had picked up in conquests at Antioch and Jerusalem, such as icons and reliquaries. During his reign, the Cathedral of Saint Sabinus was completed. 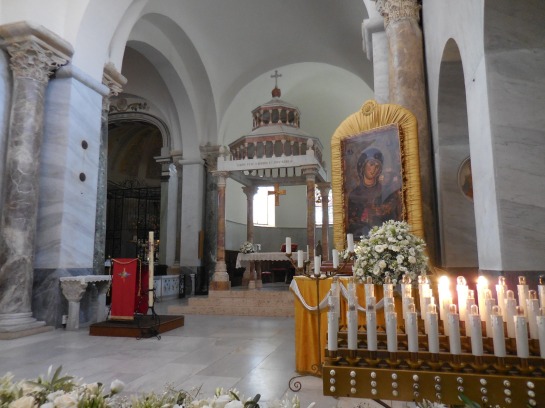 Normal control of the city would come to an end, and the city would experience many hardships over the centuries, such as numerous earthquakes. The earthquake of 1689 destroyed the cathedral, for instance. Canosa was conquered quite a few times, too. While the First World War did not bring destruction to Canosa, an earthquake in 1930 did. Another tragedy followed 13 years later. There were 57 fatalities when the city was bombed during the Second World War. Canosa officially was given the title of City in 1962. However, the 1980s certainly did not start off well in Canosa. That’s when another earthquake struck. Now the economy derives mainly from agriculture and textiles.

The images of Canosa that remain foremost in my mind are those of the cathedral. It enthralled me that every town in Puglia seemed to have an amazing cathedral. While I had not been a big fan of the Romanesque before this trip, I began to see dazzling beauty in the severity of the style. Architecturally, Apulian Romanesque structures were fascinating. I was only a few days into my week-long adventure in Puglia and already I had set my eyes on so many breathtaking gems. Each place had its own story to tell, and each story proved to be unique and riveting.

The Normans had consecrated the cathedral to Saint Sabinus in 1101. Some elements of the original structure remain. The ambo dates back to the 11th century and has an austere appearance. In contrast, the bishop’s throne from the 12th century is by no means severe. It is decorated in Oriental style. I was mesmerized by the throne. Two elephant figures served as its legs, and other ornamentation included griffons, eagles and sphinxes. The attention to detail was astounding. For me this was the highlight of the cathedral and one of the highlights of my trip.

The crypt was also intriguing with its three naves. The capitals on its columns once topped Roman monuments. The cathedral had undergone many changes during the centuries. In the 19th century, the façade was reconstructed, and one nave was extended in a Latin cross model.

Another feature that had me in awe was the mausoleum of Bohemund, who was buried in a tomb in an adjacent square-shaped, domed edifice that featured one apse. It looked out-of-place next to the cathedral with its strange shape, but it definitely stood out. My favorite elements of this mausoleum were the two doors and their symbolism. One door had arabesque ornamentation and an inscription that praised Bohemund.

The other boasted engraved figures. One showed Bohemund while another depicted his brother and rival, Ruggero Borsa. Two other figures symbolized their sons, Bohemund II and William, who had promised to end the family feud. By depicting Bohemund and his brother, they hoped that the siblings could resolve their differences in Heaven. The historical account rendered by the figures was intriguing, to say the least, and the plea for peace between the quarreling brothers was compelling. The attention to detail on the doors was amazing. I stared at those doors for a long time, unable to take my eyes away from the superb craftsmanship. 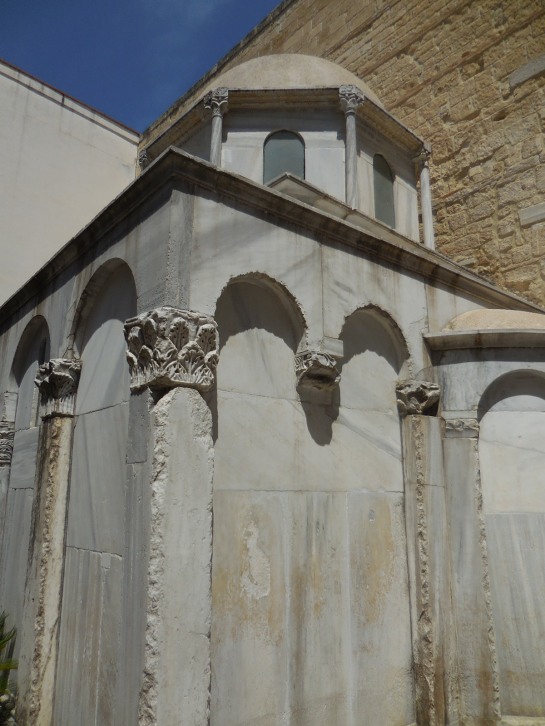 We also visited the Archeological Museum, home to some 2,000 artifacts found in Canosa. These objects included sculptures, marbles, coins, jewelry and pottery from Roman, early Christian and medieval Byzantine eras. The vases from around 3 BC especially caught my attention. It astounded me to think that this city had existed so long ago with so many ancient civilizations. To be sure, a sense of history seeped through the town. We also had a break, which I used to savor some gelato and a cappuccino.

That’s not all there is to Canosa. Our schedule did not permit us to explore everything the city has to offer. There are also palaces, churches, a theatre, a castle ruin, temples and catacombs, for instance. However, we did get a firm grasp on the historical context of the city, the significance of the cathedral and Bohemund’s influence on the town. Then we were off to another destination, and I knew I would forever hold this city and the tales it told through its architecture close to my heart.