I’ve decided to focus not only on places but also on people in my blog. Unfortunately, this post takes the form of an obituary as Jaroslav Weigel passed away September 5, 2019 in a Prague hospital at the age of 88. I saw Weigel act in many of the 15 plays performed at the theatre I love to frequent, The Jára Cimrman Theatre. This theatre is unique because it only showcases plays about the fictional character Jára Cimrman, who lived during the Austro-Hungarian Empire. All 15 plays take place at the end of the 19th century or beginning of the 20th century. The comedies employ witty and often history-related jokes as well as language-oriented puns.

Jaroslav Weigel from the play Africa. Photo from style.hnonline.sk

They all center on the genius Jára Cimrman, whose talent remained undiscovered until his posthumous papers were unearthed in a cottage in the Jizera Mountains of north Bohemia during 1966, according to the playwriting duo of Zdeněk Svěrák and Ladislav Smoljak, two of the creators of the Cimrman legend. Cimrman was a man of many trades: an inventor, a playwright, a collector of fairy tales, a traveling dentist, a composer of operas, a gynecologist, a criminologist and a world traveler, to name just a few of his professions. The tales of Jára Cimrman have become national folklore that to no small extent defines the country’s culture.

Over the years, this theatre has helped me deal with stress and hardships, making me laugh when I dearly needed a reason to smile. Seeing the performances allows me to achieve a mental balance in my life, so that I can think more clearly and solve problems more easily.

Back to Jaroslav Weigel. Ever since I started attending performances some years ago, I have been fascinated by Weigel’s accomplishments, by his stellar resume of talents and achievements. While I thought of him as an actor, he also made a name for himself as a painter, graphic artist, scene designer and costume designer. He was a member of the theatre ensemble since 1970. His association with the theatre started in the 1960s, when he worked as an editor with the influential magazine Mladý Svět (Young World). There, he came across a story by a young Zdeněk Svěrák, who co-founded the theatre. That marked the beginning of cooperation that would span five decades.

Weigel studied to be an art and history teacher at Charles University, and one of his mentors was the acclaimed Cyril Bouda, a much-acclaimed illustrator and painter. The talented student sometimes visited Bouda at his unique family house in the functionalist Baba quarter, a section of Prague six through which I often take walks. I sometimes try to imagine a young Weigel walking with a determined gait through the streets of Baba on the way to see his professor.

Jaroslav Weigel designed the Secession-like covers of the DVDs of the plays.

Weigel designed the theatre’s distinctive Secession style publications such as the DVD cover of České Nebe or Czech Heaven. Photo from mksvyskov.cz.

Weigel’s talent as a graphic artist has greatly influenced the theatre’s artistic image. He designed all the printed matter for the theatre, including posters and programs, which have a charming and elegant Art Nouveau quality and are artistic works themselves.

However, his contributions did not stop there. He also designed the costumes and the stage sets, which bring the stories to life, helping to shape a fictional world in which the spectators can become engrossed. 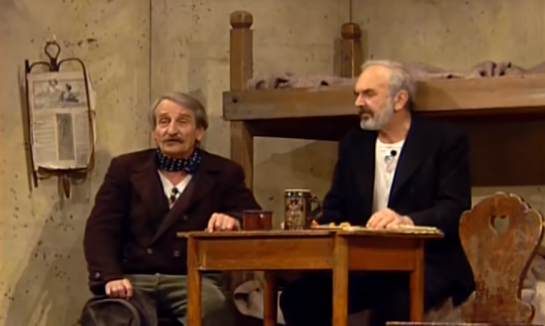 Weigel also designed postage stamps dedicated to Jára Cimrman, one of which celebrates the 50th anniversary of the theatre that took place several years ago. It shows Cimrman’s practically featureless bust.

The long-time actor’s achievements do not stop there. He also designed covers for records and illustrated books and magazines as well as calendars. He even co-designed a comic strip with Kája Saudek.

What I will remember Weigel for most is his acting. Over the decades, he had performed in all 15 plays, taking on roles as the baron leading an expedition to Africa in a hot air balloon and as the 15th century religious martyr Jan Hus, who was burned at the stake in 1415. In Messenger from Liptákov, Weigel played major roles in two short plays. In the Messenger of Light, he played the father of a son who decides to turn his parents’ home into a factory to make flashlights, with plans to have his parents walk 30 kilometers to a retirement home in the mountains. Weigel’s character, who often acts confused, winds up outsmarting his son, hitting him over the head with a flashlight. Then the mother and father make sure their son will not be able to ruin their lives.

Jaroslav Weigel in Messenger from Liptákov

In the other play of Messenger from Liptákov, Weigel played Hlavsa, who sees into the future by peering into his huge wood stove. A coal baron named Ptáček asks him to find out which suitor is right for his daughter, and Hlavsa tells the wealthy man that he sees the name Petr Bezruč on the gate of one of Ptáček’s mines. The baron, played by the very talented Miloň Čepelka, assumes he sells his mine to the poet Bezruč, not realizing that the mine will be taken away from him during the totalitarian era and that Bezruč’s writings will become a mouthpiece for the Communist regime.

The character of Smrtka, personifying death, wears a black suit with black hat and holds a scythe. He waits for Weigel’s character to finish his prophesies in order to lead him to Heaven because it is the day that Hlavsa is scheduled to die. It turns out that Smrtka misses his chance to take Hlavsa to Heaven as the designated time passes, and he has to hurry to his next customer. Smrtka tells Weigel’s character that he has two more years before another younger Smrtka comes along to escort him to Heaven.

I guess that September 5 was the appointed time for Jaroslav Weigel to go on his last journey, ending an illustrious career that helped form the image of the Jára Cimrman Theatre and that helped the ensemble survive more than 50 years.

Tracy Burns is a writer, editor and proofreader in Prague.

Jaroslav Weigel designed the cover of the collected plays

A stamp celebrating the 50th anniversary of the theatre ensemble, designed by Jaroslav Weigel.

The book celebrating the 50th anniversary of the Jára Cimrman Theatre. Cover designed by Jaroslav Weigel.