I hadn’t had time to tour this palace during my visit to Berlin in May of 2018 because it was so far away from my lodging in East Berlin and difficult to get to. This time I stayed in the more tranquil Charlottenburg district, which, along with the palace, Frederick the Great had renamed after his wife Sophie Charlotte, who had died in 1705 at age 37. I quickly grew fond of Charlottenburg’s wide streets with shops that didn’t cater to tourists. There was only one souvenir shop near my hotel, and it was at the Metro stop. Charlottenburg had an appealing ambiance and cast a spell on me.

My first stop, after quickly learning the ropes of the Berlin Metro, was Charlottenburg Palace. Both the Old Palace and New Wing were very crowded. Because it was rainy, windy and very cold on that spring day, I did not spend time in the garden or see the buildings situated in it. Next time. . . . 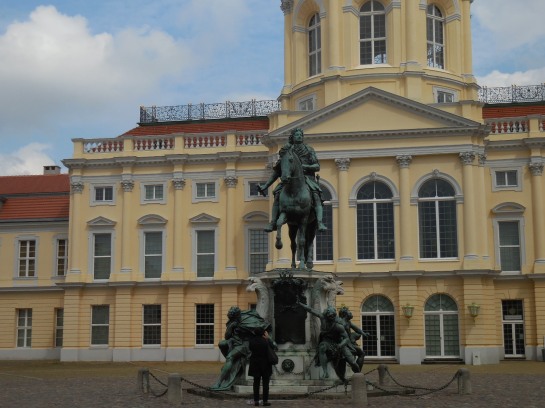 I studied the external appearance of the impressive complex. The 50-meter high domed tower of the Old Palace caught my attention instantly. Fortuna, the gilded goddess of luck, was perched atop a lantern on the tower. The New Wing, built by Frederick the Great in the 1740s, was on the left side of the Great Courtyard. Its entrance portal was simple yet elegant. 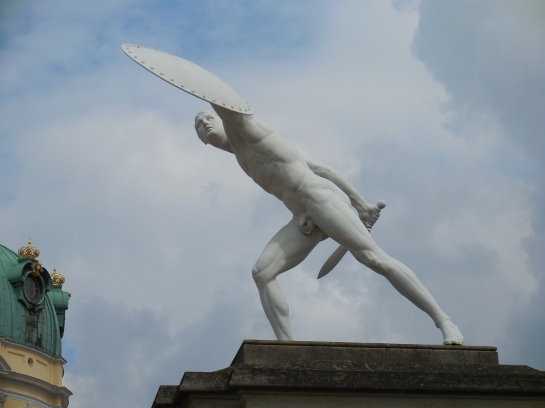 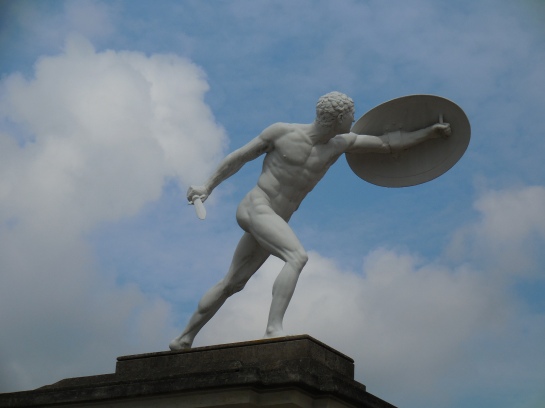 First, some background information: Charlottenburg Palace was born in the late 17th century as Lietzenburg, commissioned by then Electress and future Queen Sophie Charlotte. The couple adopted it as their summer residence. It grew into a lavish Baroque building with three wings. Cultural life flourished at the palace during Sophie Charlotte’s time. When she died in 1705, the lively cultural life ended, though King Frederick I still favored the palace. 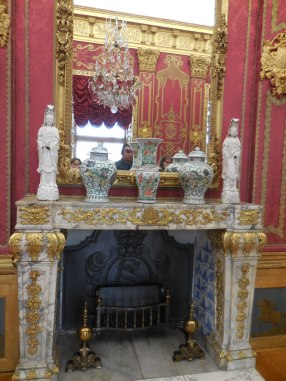 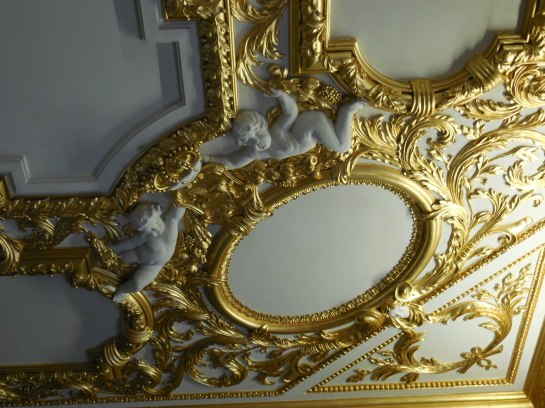 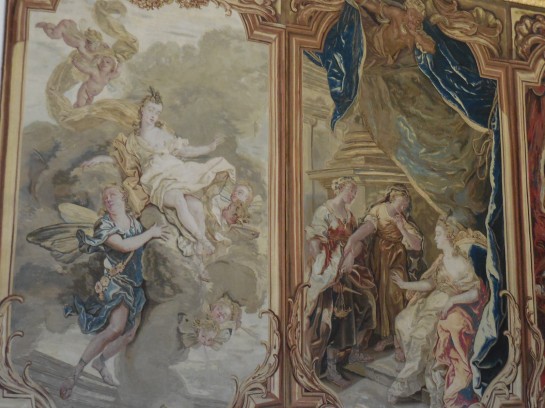 King Frederick William III and his wife Queen Louisa enjoyed life at Charlottenburg. They altered the appearance of the interior in 1810, the same year Queen Louisa died at the tender age of 34. A mausoleum with her Carrara marble tomb was erected in the garden. It was a simple yet intimate structure, resembling a Doric temple. The mausoleum is accessible to visitors today. 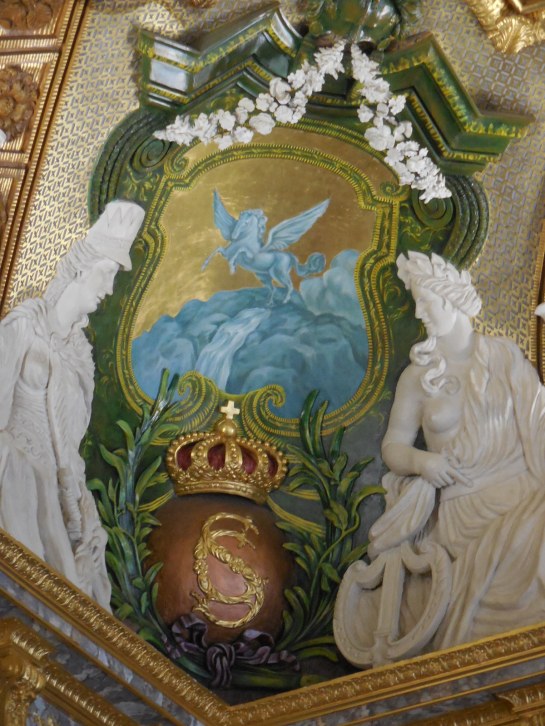 Frederick William IV and Elizabeth of Bavaria were often present at the palace after the 1848 Revolution, but the first German Emperor, William I, only paid homage to Queen Louisa in the mausoleum. Otherwise, he was not attached to Charlotenburg. When Frederick III was emperor in the late 19th century, Queen Victoria put in an appearance at Charlottenburg.

The year 1918 brought a halt to the monarchy, and Charlottenburg Palace then served as a hospital. During the Second World War, the palace took some destructive hits, but many of the priceless objects had been stored elsewhere by the time the bombs had been dropped. After the war, the palace was in much need of lengthy restoration. That work would last from the 1950s to the 1990s. At long last, Charlottenburg was restored to its former glory, presenting life of the royals from the Baroque age through the beginning of the 20th century. Charlottenburg Palace was even the home of the President of Germany from 2004 to 2006.

The interiors were very intriguing, many rooms even astounding. The lavish Baroque and Rococo décor of some spaces overwhelmed me. Still, I was a bit distracted by the size of the crowds walking from room to room, but that is what happens when you visit such a popular sight. I especially liked the chinoiserie adornment in many rooms. I found the Chinese-inspired style very impressive. I had not appreciated the remarkable effects that chinoiserie designs could have on a building before I visited the largest former resident of the Hohenzollern clan.

One intriguing fact: The Amber Room that can now be found near St. Petersburg, Russia was built in this very palace. The amber covering walls were dazzling, as I saw when I visited Russia. Frederick William I gave the lavish room to Tsar Peter the Great in 1716. 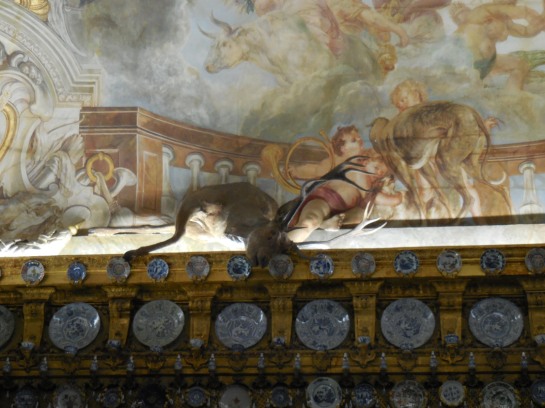 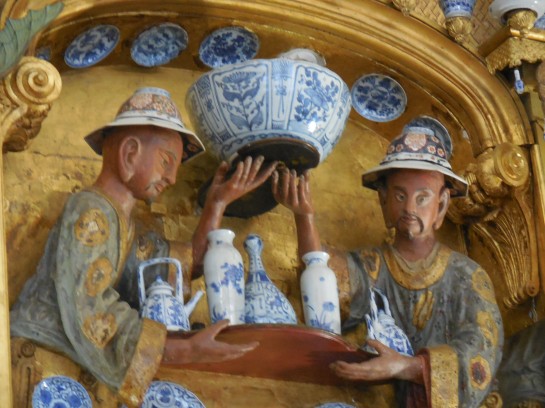 One superb space decorated in chinoiserie fashion was the Porcelain Cabinet, my favorite room in the entire palace. There are some 2,700 objects displayed in the luxurious and extravagant space. Before World War II did its damage, there were many more objects decorating the collection that celebrated the reign of Frederick I with abundant grandeur. There was so much porcelain that it was almost a shock to look at the space. Cleverly positioned mirrors magnified the number of Chinese and Japanese artifacts. The collection holds the distinction of being one of the oldest and biggest in the country.

Another room that caught my undivided attention was the Golden Cabinet with its white harpsichord decorated with painted chinoiserie features. The Glass Bedchamber of Sophie Charlotte’s First Apartment showed off masterfully carved furniture and sported chinoiserie elements in its painted lacquer furniture and porcelain. The Brussels tapestries from 1730 in the Audience Chamber of Frederick I showed off scenes taken from Plutarch’s writings. I have always been a sucker for tapestries! Lacquer furniture and Far Eastern porcelain highlighted the chinoiserie effect. The Japanese Chamber is another space in which the chinoiserie style abounds. 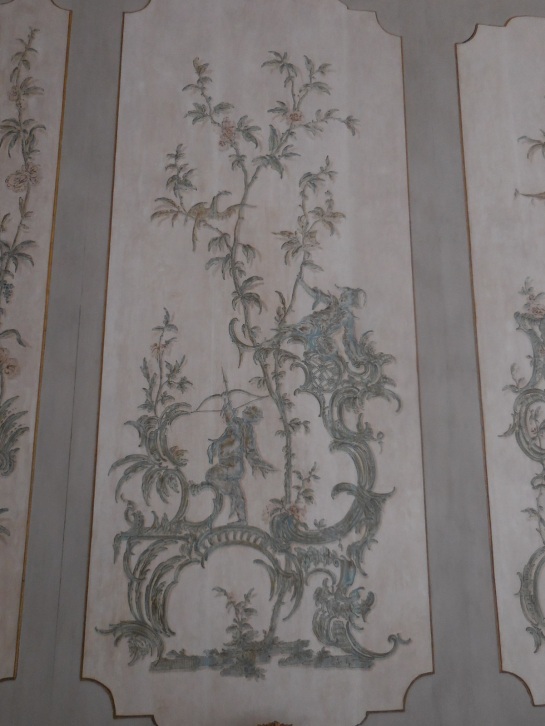 Audience Chamber of Frederick I

The chapel was phenomenal. It was here, seated in the royal gallery, that the Hohenzollern rulers, worshiped as Reformed Calvinists. Its decoration is awe-inspiring with a superb ceiling painting and carved pulpit. I looked up and saw the lavish decoration of a huge crown and the Prussian eagle.

The Gris-de-lis Room featured an important painting by Watteau as well as other Rococo gems. In Watteau’s work, the protagonists have been indulging in earthly delights on the island of Cythera and are on their way to a golden ship that will take them home. The Golden Gallery was stunning with its green and gold Rococo adornment. The room, once used for balls, measured 42 meters long. Some of the gilt decoration includes shapes of flowers and shells. The Etruscan Rooms were influenced by Etruscan, Greek and Roman art and took on an exotic quality in the Rococo style.

The Ancestral Gallery was regal in appearance with portraits of the Hohenzollern dynasty. Frederick the Great’s portrait was life-size and impressive. Even the details of the King’s Bathroom were not to be overlooked. Taps on the faucets appeared as dolphins. These sorts of details greatly impressed me. 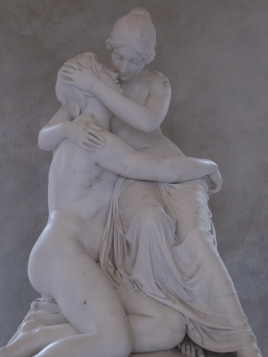 I really was drawn to the Bedroom of Frederick William II, which was decorated in a white-striped bright yellow pattern. I recalled the bright yellow of my mother’s kitchen, a cheerful room where so many topics have been discussed as we set the world to rights, voiced our dreams and hopes as well as our disappointments and sorrows.

The East Indian Chintz Room was no less spectacular. A favorite of Queen Louisa, the walls were covered in chintz, a waxed cotton fabric decorated with plant ornamentation as well as bird themes. The Adjutant Room was also intriguing for its South American rain forest landscapes. Paintings of Italian vistas in another room brought to mind my love of Italy, a country I tried to visit every year. 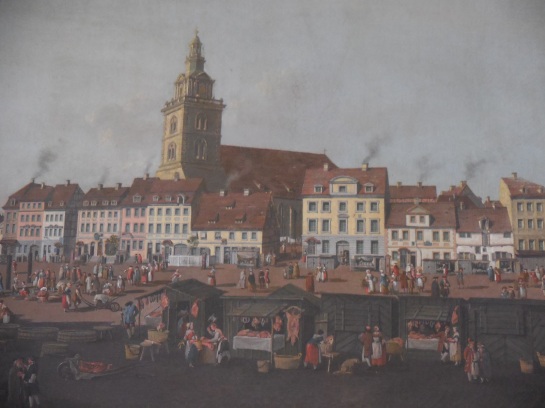 Other buildings in the 55-hectare Baroque garden with Great Orangery included the New Pavilion, constructed from 1797 to 1869 and inspired by a villa in Naples. Romantic and Biedermeier paintings adorned its interior. The Belvedere, once a three-storey observation tower, was now home to a Berlin porcelain museum. The Great Orangery was another plus. During the late 18th century, plays and operas were staged at the impressive former theatre building. 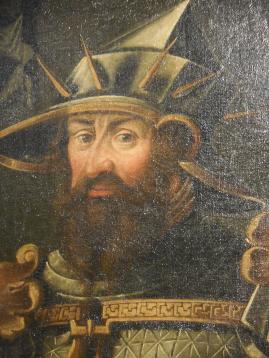 I hope to visit these places, plus the mausoleum for Queen Louisa, next time I visit, weather permitting. There were three museums across from the palace, two of which were opened. I explored them and found a small hamburger joint for locals where I savored a juicy burger.

There always seems to be something drawing me back to Berlin. 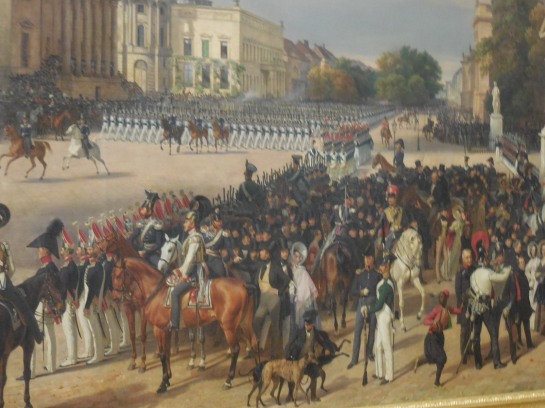