One of my favorite pastimes in Prague is taking long walks through architecturally intriguing sections of the city. My favorite quarter in Prague is the villa-dotted Hanspaulka area in Prague’s sixth district, which is ideal for long walks on sunny days. 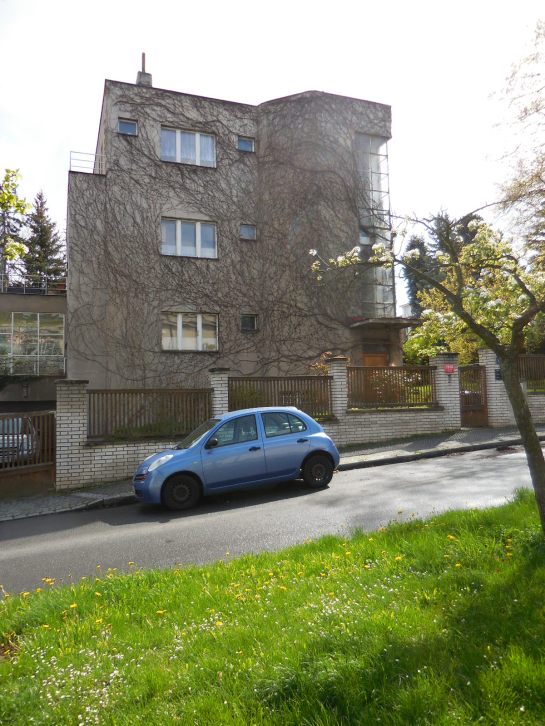 The quarter gets its name from Jan Pavel Hippmann, inspector of the archbishop’s farms during the 18th century. In German his name was Hans Paul, and his nickname was “Hanspaul.” He built a Baroque-Rococo chateau in the area and lived there for 40 years. His chateau was dubbed “Hanspaulka.” The section has been known as Hanspaulka for more than 200 years. 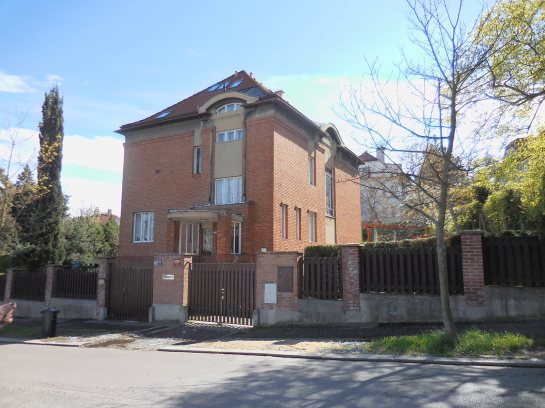 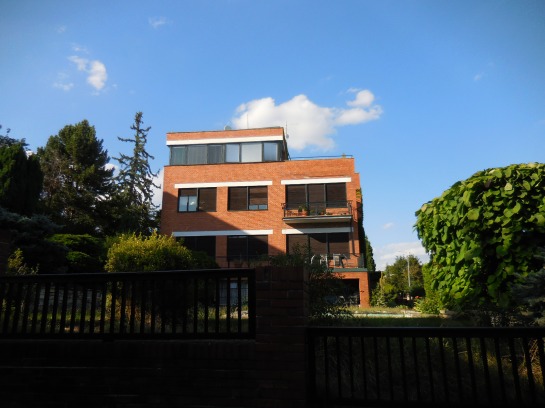 The quarter has not always been dotted with villas. From the 14th century, it was a section of vineyards and six small chapels to which residents from all over the city flocked. (Two of these chapels are still standing.) Today’s main street, Na Pískách, was filled with sand. It gets its name from the Czech word for sand – “písek.” 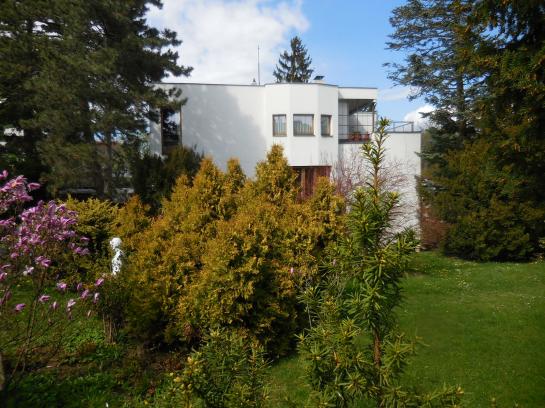 Before the Thirty Years’ War, there were about 120 vineyards in Hanspaulka. The war did a lot of damage, to put it lightly. After 1627 many owners decided to try their luck abroad, abandoning their vineyards. During 1637 only 50 vineyards remained. The vineyards were devastated by war again in the middle of the 18th century, and only two were revived. There are no vineyards in the section now, but many streets are named after former owners of vineyards.

While the first villas cropped up in the 19th century, the architectural boom of villa construction occurred in the 1930s. Well-known architects, such as Karel Lhota, designed many of the luxurious homes there.

The chateau is definitely one of the main sights in the area. It has a late Baroque façade. After World War I it became an archeological museum. In 1996, it was sold to a private company. Now it houses the institute of former Czech president and long-time politician Václav Klaus.

The interior of St. Matthew’s Church

The pulpit of St. Matthew’s Church

St. Matthew’s Church was originally a rotunda. The church came into being in 1404, but the original structure was demolished in 1770. Its current appearance dates back to the late 1800s. Legendary film and theatre actor Josef Kemr and architect Pavel Janák are buried in its cemetery. I remember seeing Kemr on stage, and I even owned some films in which he had performed. I admire Janák’s Cubist and Rondocubist styles of architecture. I recalled that he designed Prague’s Adria Palace and some villas in the Střešovice quarter of Prague’s sixth district. He had also drawn up the plans for the functionalist Baba Housing Estate near Hanspaulka. Janák also contributed to the architecture of Prague Castle. 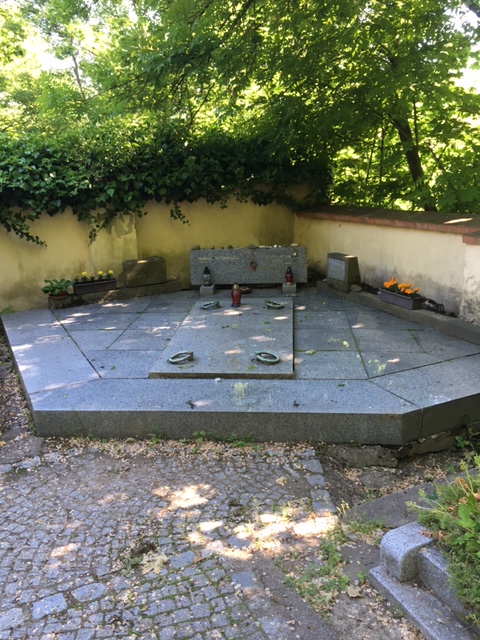 The buildings in Hanspaulka show off a variety of architectural styles. You will come across a Neo-Baroque villa with balustrades, oriels, dormer windows and small towers and a Neo-Classicist villas, too. A former popular pub was built in geometric Secession style. Another former pub served as a meeting place for underground artists during the Communist era, and today a plaque commemorates the establishment. Art Deco townhouses as well as villas with sculptural decoration and ceramic veneers are sprinkled throughout the quarter. Hanspaulka was not always a quarter catering to the wealthy. In the 1930s members of the working class would take out mortgages to buy the Art Deco townhouses. They were allowed to live in one room, always opting for the kitchen, until the mortgage was paid off. 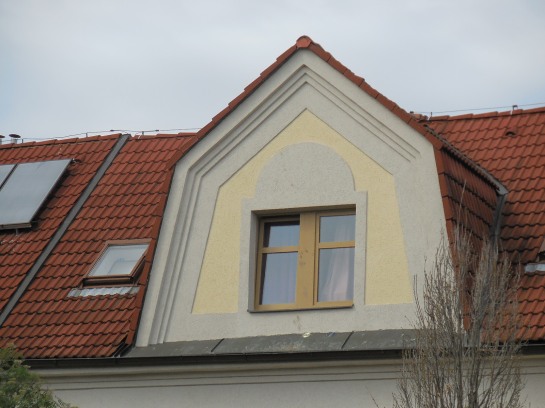 Functionalism and Purism are no strangers to Hanspaulka. In fact, the first functionalist villa in Prague was built in Hanspaulka. The design of this villa was greatly influenced by the works of Le Corbusier. It features a semi-circular balcony and a roof terrace. A former French high school, built from 1930 to 1934, features classrooms lit from both sides and terraces where classes can take place if weather conditions permit. While I admire a variety of styles from Romanesque to Neo-Gothic, functionalism is not my cup of tea. Still, I admire the architectural characteristics of these villas. 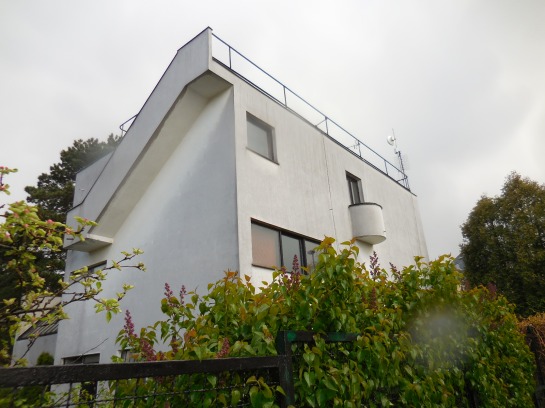 The Linhart Villa, the first functionalist villa in Prague 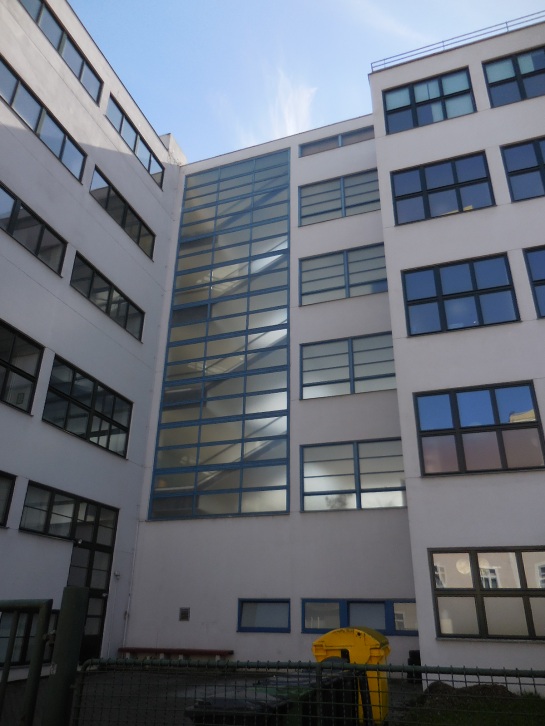 Unfortunately, not all the buildings are so elegant. One structure was constructed during the early 1950s in the style of social realism, which prevailed under Communism. The two sections of the building have house signs that glorify the working class. 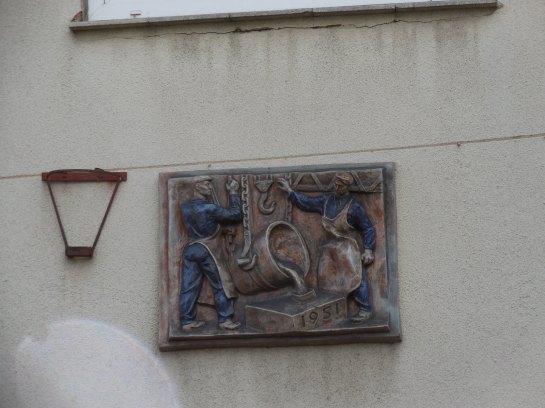 Demolished in 2014, the Hotel Praha was another eyesore in a style that may appear to fit into the social realist realm but really has Western characteristics. It was built from 1975 to 1981. An exquisite chandelier hung in the foyer, and the terrace offered magnificent views of the city. Until the Velvet Revolution of 1989, the hotel served as accommodation for guests of the Communist government. Now it is a garden that is not open to the public. An international school will be constructed on the premises in the near future.

Many famous Czech personalities have lived in Hanspaulka – Nobel Prize-winning poet Jaroslav Seifert and actress Lída Baarová, who was Nazi Minister Joseph Goebbels’ mistress for two years while she was residing in Berlin. I recalled discovering Seifert’s poetry as I delved deeper and deeper into my studies of the Czech language, when I was a student at Prague’s State Language School. 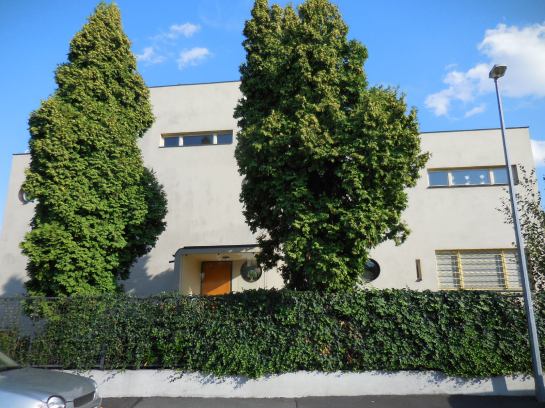 Baarová certainly had led an intriguing life. Hitler ordered Goebbels and Baarová to end the affair and banned Baarová from acting. At a premiere of one of her films in Berlin, paid moviegoers shouted insults at her, and the screening had to be cancelled. Baarová could not take it anymore. After having a nervous breakdown, she moved back to Prague and then to Italy. However, the end of the war did not mean the end of her problems. Back in Czechoslovakia after the war, the authorities suspected her and her family of collaborating with the Nazis. Her mother died while being interrogated, and her sister committed suicide. Though she was never charged, Baarová spent a year and a half in custody. When freed, she moved abroad. She died during 2000 in Salzburg. Baarová is buried in Prague.

Jaroslav Weigel on the left, Ladislav Smoljak on the right, from Murder in the Parlor Car, Divadlo Járy Cimrmana, photo from filmer.cz

I know that the late film and theatre director / actor Ladislav Smoljak, best known for his roles at the Jára Cimrman Theatre, lived in the area because I used to see him with his adorable dog at the local vet. 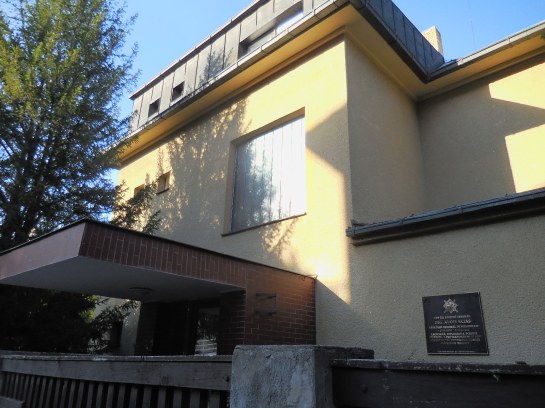 The villa of Alois Eliáš 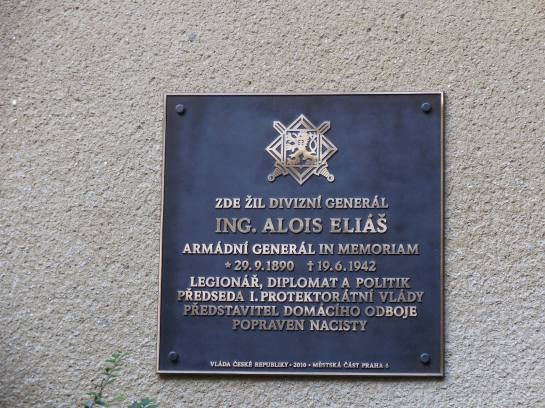 A plaque commemorating Alois Eliáš is situated on his former home.

Czech politician and General Alois Eliáš, who was deeply involved in the resistance movement during World War II, lived in this area. He was executed by the Nazis.

I was most intrigued by the fate of Vlasta Burian, who had a luxurious villa with a swimming pool, gym and tennis courts in the area.  Burian made a name for himself as a film and theatre actor during the First Republic, which lasted from 1918 until 1939. I have enjoyed watching all his films available on DVD. I admire his comedy for its improvisation, black humor and satire. From 1923 to 1956, he made four silent films and 36 with sound.

Unfortunately, Burian suffered from manic depression. He also had his share of trials and tribulations. Burian was branded a Nazi collaborator after World War II because he had performed a small role in one radio play spouting Nazi propaganda. During these bleak times, he wound up serving several prison terms, working in the mines and later serving food in a cafeteria, as he wound up destitute. The Communists had taken away all his property and belongings. The authorities confiscated his villa during the 1950s, when the Communists placed a nursery school there.

Burian was rehabilitated in 1994. After the Velvet Revolution, his grandson was given the property and now rents it. The villa is once again luxurious, though without a swimming pool. The tennis courts are still standing. A plaque commemorating Burian was placed on the house in 1998.

Sometimes, when I am taking my walks, I ponder over Hanspaulka’s role in the 1945 Prague Uprising, when the Germans were retreating. One-third of all the German soldiers were housed in Dejvice, the area that includes Hanspaulka, as the Nazis had their military headquarters in this district. German officers occupied many villas in Hanspaulka, taking over those, which had belonged to Jews. 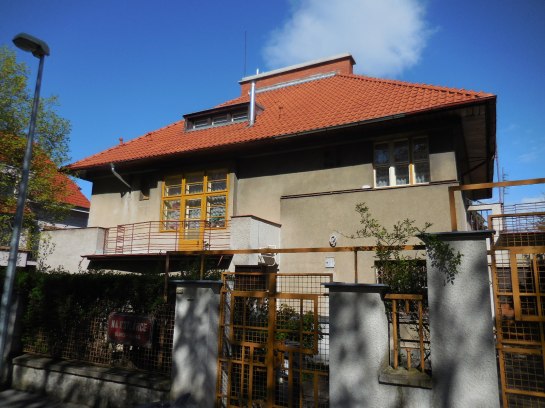 On May 4, 1945, Hanspaulka residents were hugging in the streets, rejoicing that the Germans could not win the war. But things were not that easy. The residents cut off important streets from the Germans and put up about 45 barriers in the quarter. At first, they had few weapons, but then they were able to confiscate weapons from 60 German officers whom they arrested. The Czech inhabitants also obtained weapons from German trucks and cars and prevented Germans from escaping. The Nazis had their area headquarters at Hanspaulka’s elementary school, where they stashed their weapons and had their barracks.

Even when Praguers had overcome the Germans in many parts of the city, the fighting in Hanspaulka continued. Germans set fire to houses, pillaged homes and killed Czechs. They fired on any villa where Czechs lived, especially at homes displaying the Czechoslovak flag. While one high school student named Náďa opened her window to see what was going on, the Germans shot her dead. The resistance fighters created a makeshift hospital with 24 beds and four doctors plus 24 nurses. Someone had to guard the corpses piled in an abandoned building on Na Hadovce Street to prevent people from stealing the deceased’s coats, shoes and other clothing. Two of the dead left there were German women who had gassed themselves when they realized their country had lost. In the early morning hours of May 9, the Soviets liberated Hanspaulka and took over the school. 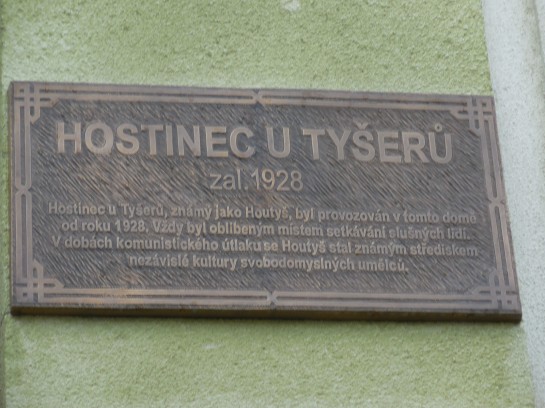 I would think about how peaceful it is in Hanspaulka now and how chaotic and horrific it must have been during the uprising – villas on fire or pillaged, piles of corpses, Germans shooting at homes displaying Czechoslovak flags. Usually, my thoughts during my walks are not so bleak. I admire the beauty and elegance of the quarter today, and the variety of architectural styles never fails to dazzle me. I take note of the functionalist, Neo-Classicist, Neo-Baroque and Art Deco architecture. I like the Art Deco style best. On the main street there are several quaint cafes with outside seating in the summer, and I sometimes stop there and enjoy the sunshine. During my walks, I also am able to sort out my own problems and feel at peace after a stressful day or week.

More photos to come as the weather becomes more agreeable!

One thought on “Hanspaulka Diary”