NOTE: It is not permitted to take photos inside the villa. Photos can only be taken outside from the street.
I was excited about my trip to the Rothmayer Villa in Prague’s Břevnov quarter of the sixth district. I had never been there, even though the villa had been open to the public since the fall of the previous year (2015). In fact, I had not even heard of the architect, Otto Rothmayer before I came across the listing of the villa in a Prague cultural guide. This definitely would be a new adventure.
When I first set eyes on the Rothmayer Villa on the corner of a tranquil street next to a hospital, I was surprised at how small it was. I had thought it would be bigger because I had visited the much larger Müller Villa a few days earlier. I was also surprised at the lack of decoration on the façade, which had symmetrical windows and a spartan cornice. Yet even the simplicity of the rectangular design exuded a sense of elegance. Certainly, the classicist-modernist style was not my favorite. I preferred styles with some ornamentation, such as Art Nouveau. Still, it was intriguing, and I appreciated the sobriety of the design. 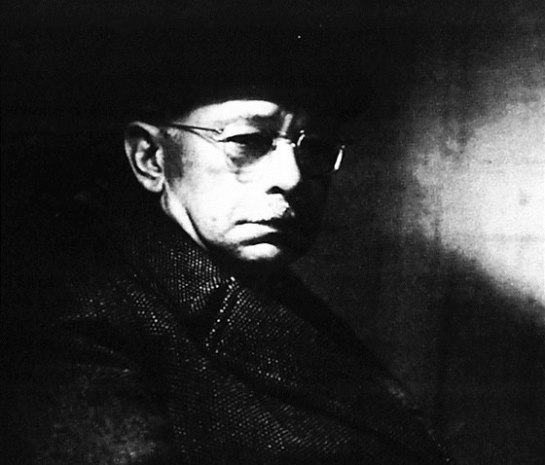 Otto Rothmayer, photo from bydleni.idnes.cz
Otto Rothmayer built this house for his family during 1928 and 1929, a time when the Tugendhat Villa was under construction in Brno, designed by legendary architect Ludwig Mies van der Rohe and a time when work on the Müller Villa, designed by Adolf Loos and Karel Lhotka, was underway in another section of Prague 6. Many villas in Prague were erected during the interwar years.
The guide started off by providing information about Rothmayer’s life and work. Rothmayer took up carpentry at a young age. He turned to architecture before World War I, studying under Slovenian architect Jože Plečník at Prague’s Academy of Applied Arts. Plečník’s creations would inspire Rothmayer for the rest of his life. After World War I, Rothmayer finished his studies and worked in the studio of Cubist architects Pavel Janák and Josef Gočár. He also cooperated with Janák and Gočár on the design of a pavilion for an exhibition in Lyon during 1920. In 1921 he took up the post of assistant architect at Prague Castle with Plečník as his boss and colleague. Rothmayer held the position until 1958, when he retired. After 1930 Plečník left Prague Castle while Rothmayer continued to work there.

Rothmayer’s impressive designs at Prague Castle includes renovating the apartment of the first president of Czechoslovakia, Tomáš Garrigue Masaryk. He also created plans for some of the courtyards and improved the appearance of the Theresian Wing of the Old Royal Palace. He designed the Staircase Hall using what was then a new material, faux marble. His style was also visible in interior renovations of the New Royal Palace.
Yet Rothmayer’s designs were not limited to Prague Castle. He designed three other family houses, all with porches so they would allow residents ready access to the outdoors. One of his creations was a weekend house for sculptor Otakar Hátlý. Rothmayer also served as a professor of Decorative and Applied Arts from 1947 to 1951. He stopped teaching because his ideas clashed with the social realism philosophy of the era. He also designed exhibitions for the Museum of Applied Arts and was responsible for installations of various exhibitions at the Museum of Decorative Arts and National Literary Monument. A side altar for the Church of the Most Sacred Heart in the Vinohrady quarter of Prague is another example of his work.

Vila Stadion, 1928, from http://www.renton.si
The guide told us that Plečník’s Villa Stadion in Ljubljana inspired Rothmayer’s design of his family villa. I was familiar with the name and creations of Jože Plečník, whose style could be said to fit into the category of Art Nouveau while Rothmayer’s work was much simpler in design. There was a huge exhibition of Plečník’s architectural gems at Prague Castle many years ago. Also, when I had visited Ljubljana, I had made a trip to his studio. Plečník was responsible for the modern look of Ljubljana, designing architectural masterpieces throughout the city. For example, his creations there included the Triple Bridge, the Slovene National and University Library, a cemetery and parks. Elsewhere in Europe, he designed many structures in Vienna and his style can be found in Belgrade, too.

Jože Plečník, 1933, from http://www.dieselpunks.org. Photo by Karel Repa
Plečník’s works at Prague Castle under Masaryk’s tenure as president included reconstructing the first and third courtyards and reconstructing the appearance of the southern gardens. Plečník spent three years doing renovations on Masaryk’s apartment at the Castle, and Rothmayer took part in this project as well. Plečník’s distinctive style can also be seen in the Spanish Hall and Bellevue Summer Palace. Yet his designs are not limited to the Castle. He also designed structures in Vinohrady and the Old Town of Prague, for example. Outside of Prague he worked on the president’s summer residence at Lány and at Křivoklát Castle.

The most beautiful church in Prague Heart, designed by Plečník, photo from newchurcharchitecture.wordpress.com.

After explaining to the group about Rothmayer’s background, the tour guide drew our attention to black-and-white photos on an ash wood table designed by Rothmayer. The guide pointed out one photo in which Otto’s wife Božena had a short haircut and wore pants, signs that she was a modern woman. Another photo showed the villa surrounded by fields. Rothmayer had built it on an isolated plot of land. Now other villas flanked the street, and the villa was right next to a huge hospital. We also learned some basic information about the villa. It had a rectangular plan with a cylindrical shape that was the large, impressive spiral staircase connecting the floors. It was intriguing that the family had not owned a car. They walked to town, which was quite a distance away. 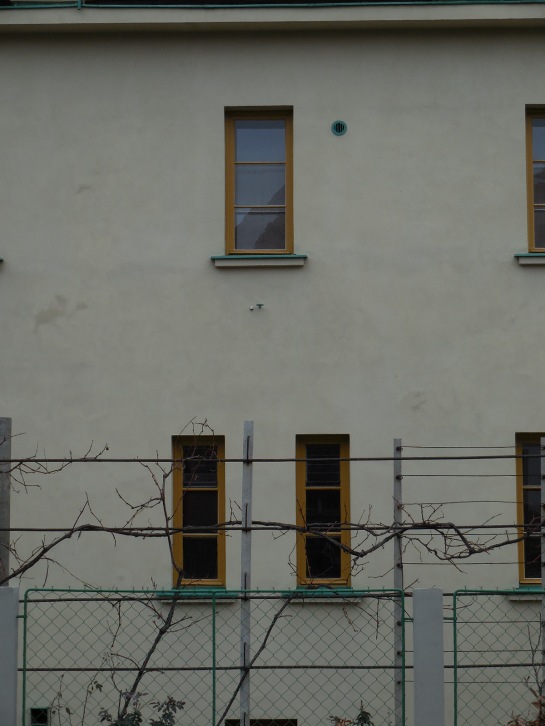 Like Plečník, Rothmayer favored wood for his furniture as was evident in this room. Other furnishings were created from spruce and pine. Jan Vaněk was responsible for the design of four impressive Windsor chairs. I was familiar with his designs. He was a Brno-based architect who had also collaborated on the Müller Villa not far from here. The floor was original, made of cork. A unique teapot in the space had once belonged to Plečník. The guide also commented that when the house was constructed, small heaters that used coal had been placed in each room. There was also a simple yet elegant white tiled stove in the space; these tiled stoves were sprinkled throughout the villa.
Božena’s room, currently the ticket office, was next. I saw examples of her embroideries with folk art themes framed on the walls. Her creations included clothes, including pants for women, plus purses and jewellery. She also set up an exhibition about the modern woman. I was drawn to the small bust of Božena Němcová, a 19th century Czech writer who is credited with founding modern Czech prose. She also wrote fairy tales and travelogues, for example. Her best known work is her novel, The Grandmother, based on memories of her happy childhood in the countryside. In the book the grandmother represents love, goodness and morality. Her literary masterpieces greatly contributed to the Czech National Revival movement. I certainly understood how a modern woman like Božena Rothmayer could be inspired by this author. 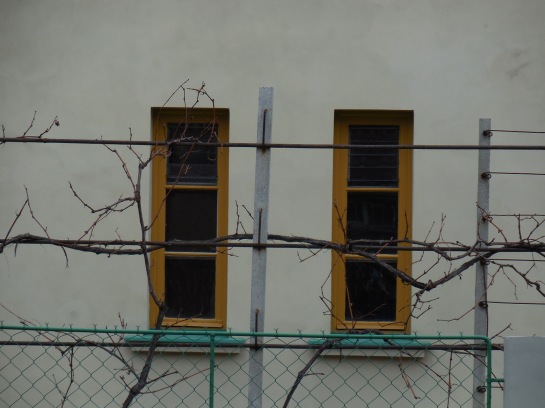 Then we came to the room where Otto had worked and slept. He had made all the furniture for this space, which had once been full of belongings – drawings, paintings and books. The desk was mobile; it could move back and forth to get the best light. The drawers in the desk could move from side-to-side. It reminded me of the moveable drawers in the closets designed by Vaněk for the Ladies’ Dressing Room at the Müller Villa.
The Children’s Room, where their son Jan Rothmayer (1932-2010) had slept, included an audio system that Jan had designed. He was an electrotechnician who had also taken up photography, inspired by family friend and legendary photographer, Josef Sudek. who had often visited in the 1950s and 1960s and had taken many pictures of the house and garden. Sudek was best known for his photos of Prague, such as the interior of St. Vitus Cathedral and panoramas of city. His style could be described as neo-romantic. Sudek was able to take such beautiful photographs, even though he had use of only one arm.

Josef Sudek, photo from http://www.afuk.cz
In this room we watched an intriguing video about the Rothmayer family and their work. The photos taken by Jan were particularly intriguing. My favorite showed a lit candle next to a half-full glass of wine. Sudek’s still lifes had certainly been an inspiration for this picture.
The room on the highest floor was once the Winter Garden Room and became the Summer Study during the 1950s. I had expected that there would be more books on the shelves. I was drawn to the small sculptures that also decorated the space. At one time, the small terrace had included a herb garden.
Last, we went to the basement, which included a carpentry workshop where Otto had made his furniture. There was also a guest room, where Sudek had slept. The armchair and table were designed by Plečník.

Then we were free to go outside into the garden, which was sprinkled with glassware and rocks. Rothmayer had worked with glass artists. A big, blue vase caught my attention. The garden, like the villa, was simple yet elegant. I liked the white garden furniture made from rough steel. It had been very popular at the time.
Because the family had lived there until 2009, many of the furnishings were authentic. Also, the Museum of Decorative Arts in Prague had some furniture from the villa in its collection, so many of the furnishings were preserved. The villa had remained private property under Communism, when many places had been nationalized. 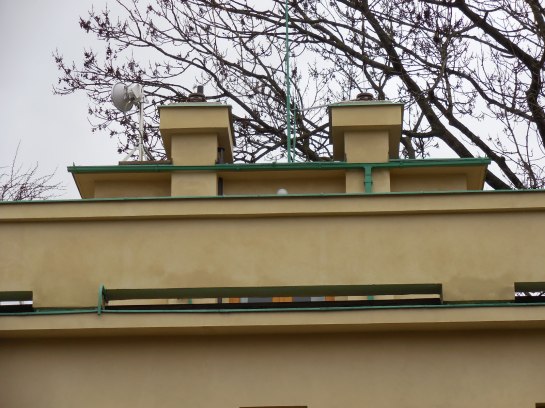 I was surprised that the rooms were small and that the style of the furniture was so simple. Yet the simplicity was by no means a negative aspect. It had a certain elegance to it. I had expected the villa to have a lavish interior because I had visited the Müller Villa several days earlier. Designed by Viennese architect Adolf Loos, who also had Czech citizenship, and Czech Karel Lhotka from 1928 to 1930, the Müller Villa was much bigger, with a sober, unornamented exterior shaped like a cube. However, the interior greatly differed from the Rothmayer Villa in its extravagant decoration. Both villas, though, made use of wood as a key material for furnishings. Yet Loos had also utilized marble and stone, which were expensive materials.
Visiting this villa greatly improved my understanding of modern architecture. I became familiar with the lives of Otto Rothmayer and his family as well as with their contributions to Czech architecture, photography, fashion and textile design. I appreciated the simple, practical style. I would certainly recommend this villa to tourists interested in modern architecture.