When I bought my ticket to visit the underground cellars below the center of Pilsen (Plzeň in Czech), I thought the tour would be interesting. However, I had no idea it would be fascinating and one of the highlights of my many trips to this dazzling city in west Bohemia. The ticket office was at the entrance to the Brewery Museum, which I also visited and found intriguing, even though I rarely drink alcohol.

Admittedly, I wasn’t a big fan of visiting underground areas, and I admit that I was a bit scared for my safety when I had to put on a hard hat. It turned out that there was no reason to be afraid. The corridors were not wide but provided enough room for one person to walk through. I can at times feel a bit claustrophobic, but I did not have a problem there. In some parts in caves I had visited, I had been squashed between rock formations, and the paths had been very tight.

The guide explained that we would explore 800 meters of the underground area, though the cellars were actually much more extensive. The passages can be traced back to the early 14th century. They were built soon after the founding of the town by the first houses that had obtained the right to brew beer. The cellars served various purposes. Food was stored there, and beer was brewed in the underground areas. During sieges of the city, inhabitants took refuge in this labyrinth. The passages also became important parts of the city’s defense system. In addition, during the Middle Ages, the pubs above the passages were ordered to close at a certain hour, and the establishments carried on serving beer in the cellars after hours.

The eloquent guide told us the different eating habits of the poor and the rich during the Middle Ages. Poor people used ceramic tableware and ate mostly vegetarian food because meat was too costly. Birds and fish made up part of their diet. The wealthy, though, used glass, metal and silver tableware and ate a lot of meat and spices. They ate with their hands, though they used knives when eating meat. The well-off citizens refused to use forks because they thought they resembled pitchforks and were bad luck. 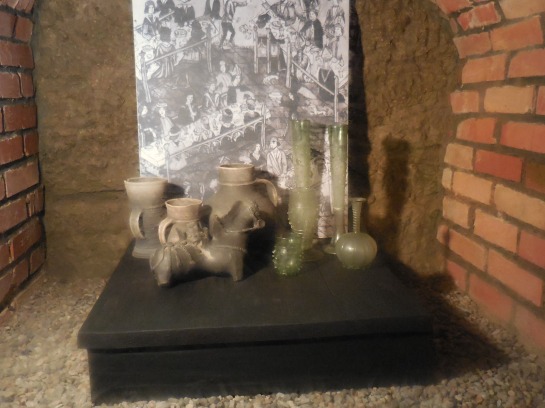 I saw beautiful tiles from stoves constructed in the Middle Ages. One that caught my fancy showed Saint George fighting the dragon. I also saw an exquisite decorated water pot from medieval times.

The guide talked about the three symbols on Pilsen’s coat-of-arms – an angel, a camel and a greyhound. I loved the story about how the camel came to be one of the city’s symbols. During the Hussite wars, the Hussites attempted to overtake the city four times, but never prevailed. The Hussites tried to frighten the inhabitants of Pilsen with a camel. However, their plan backfired in a major way. The inhabitants liked the camel so much that they put the animal on their coat-of-arms. In the end, the Hussites left, defeated. The camel stayed.

The guide also explained that the three golden fountains of contemporary art on the main square stood for the three symbols of the city. The T-shaped fountain stood for the angel while the F-shaped one represented the camel. The Greek letter stood for the greyhound. I was captivated by the three fountains, though I had not understood what they symbolized. Though contemporary, they fit in well with the medieval atmosphere of the main square dominated by the Church of Saint Bartholomew. I was impressed that they by no means take away from the square’s historical charm. 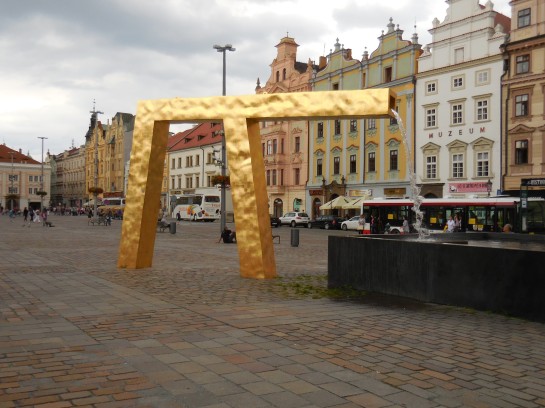 I also saw samples of ceramics from the 14th to the 17th centuries. Two objects that caught my attention included a unique 16th century sieve and a piggybank from the 17th century. I was intrigued by the many wells – we saw 20 of them!

When we reached one point, the guide told us that we were standing under a house that once printed books in Pilsen. The first book published in Pilsen hailed from 1468. I also was intrigued with a pair of very pointy shoes, often referred to as poulaines. They looked very uncomfortable. I did not understand how someone could squish up his or her feet into those shoes. How would it be possible to walk in them? During the Middle Ages, very pointy shoes were a sign of wealth. I recalled that they had been particularly fashionable in France during that era, as evidenced by The Book of Hours. The pointier your shoes were, the richer you were.

There were many guilds during the Middle Ages, including a guild of manufacturers of tiled stoves. I saw many examples of tiles from stoves during the tour. Emperor Rudolf II lived in Pilsen for one year when the plague was ravaging Prague, and the inhabitants presented him with a tiled stove to show their appreciation that he had chosen their city as his temporary residence.

I saw some cannonballs used by the Hussites. They weighed 200 kilograms each!  The cannonballs were able to demolish the first town wall, but they did not destroy the second wall. The inhabitants of the city threw the cannonballs back at the Hussites, foiling their enemy’s plan.

A functioning water wheel fascinated me. It was a replica of one that dated from 1532. I also saw remains of a water town hailing from 1847. It had played a role in the town’s defense system. Emil Škoda, an entrepreneur who set up the Škoda factory that would play a major role in European industry during the 19th and 20th centuries, was born in the water tower on November 19, 1839.

The 2002 floods had made their way to Pilsen. A sign showed the high level the water reached on August 13 of 2002. The entire underground had been immersed in water. I recalled my personal experience with the floods for a few moments, lost in thought.

During 2002, devastating floods ravaged the republic. I was in Slovakia at the time, so I did not witness them first-hand. Even though the house where I lived in Prague was on a hill, there was significant water damage because we had had no roof because it was being repaired. There was only a protective covering. Rain from the downpours seeped into my flat. I came back to find some of my clothes ruined and mold on the walls. My cat was traumatized. Luckily, my books were all dry. Living through the aftermath of the floods was one of the most difficult times of my life in Prague, where I have lived for 23 years.

When we reached the end of the tour, I was enthusiastic and bewitched by the information I had learned about the Middle Ages and the history of Pilsen. The objects I had seen during the tour were very intriguing. I thought the tour was organized well. I had taken the tour in English because that was the one offered at the time I was able to visit, and the guide had an excellent command of the language and a talent for communicating effectively. 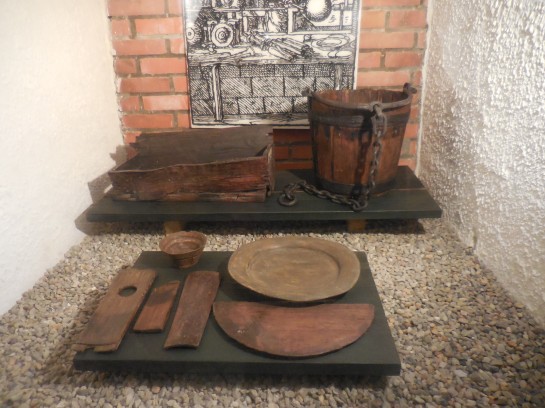 I am convinced that the underground tour should not be missed when tourists are visiting Pilsen. It is a must-see. When you come back above ground, you understand how the Middle Ages affected Pilsen and have a greater appreciation for the city.

I left Pilsen for Prague about an hour after the tour, and I was certainly more than satisfied with my day trip.

One thought on “The Historical Underground of Pilsen Diary”