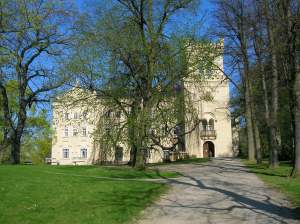 I had come across Chyše chateau by chance while flipping through my old Kamenný klíč publication of castles and chateaus. When I read that the tour included an exposition about Karel Čapek, I was hooked.
Karel Čapek had been perhaps the greatest Czech writer ever, a master at all kinds of genres – science fiction, mysteries, novels, poetry, fairy tales, nonfiction, travelogues and more. I had studied his works for my master’s degree in Czech literature and was eager to see an exhibition about him. I had never known that he had worked as a tutor at the chateau. Curiously enough, I had never heard of Chyše before that, even though it had been opened to the public since May 30, 1999.

The only public transportation was by train through Rakovník, but I would only have five minutes to change trains, or I would have to wait two hours for the next train. The transportation back to Prague was awful as well. So, I went to Karlovy Vary again and took a taxi to the chateau that would charm and bewitch me as soon as I set eyes on its romantic, Neo-Gothic façade (I love Neo-Gothic facades!) and impressive park. I also hoped to visit the brewery next door. I had heard that Chyše made a decent beer. 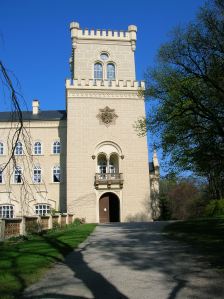 The history of Chyše Chateau was enthralling. It stretched back to the second half of the 12th century, when the then medieval fortress was owned by the Odolenovic clan for 200 years. The castle was destroyed by the Hussites during the Hussite wars in 1422. (Lasting from 1419 to around 1434, the Hussite wars pitted the Radical Hussites against the Moderate Hussites, Holy Roman Empire, the Pope, Hungary and others. Neither party was really victorious.)
Six years later, its new owner Burián z Gutštejn restored it and built a hospital and a church as well. Although he died in 1489, his descendants manned the castle until the 16th century when it fell into the hands of the Lobkovicz family. It was Mikuláš from Lobkovicz who changed the appearance from Gothic castle to Renaissance chateau in 1578, but a year later he sold the chateau to Bohuchval Berka from Dubé.

Unfortunately, the chateau was confiscated after Bohuchval revolted against the Emperor in the early 17th century. The Michna family gained control of the chateau and retained it for almost 90 years, though there was a 20-year gap when the family did not own it. The Michnas were responsible for much valuable construction at the chateau and in the town. Thanks to them, a monastery was erected, the Carmelite church was renovated, another church was built and the chateau was transformed into Baroque style. It was under their supervision that legendary Czech Baroque painter Petr Brandl executed the biblical ceiling fresco called “The head of son Saul is brought to King David.”
A turning point in the chateau’s ownership came when Count Prokop Lažanský obtained it during 1766. Chyše would stay in his family until it was confiscated due to the Beneš decrees that took property from German citizens in 1945, as the owners at that time had German citizenship. From 1946 to 1976 the chateau served as several types schools, but in 1976 it was closed and became decrepit and dilapidated. Chyše was put up for sale in 1993. During 1996 it was saved thanks to the efforts of Vladimír Lažanský from Děčín, who bought it for 10 million crowns. The chateau was open to the public in 1999. 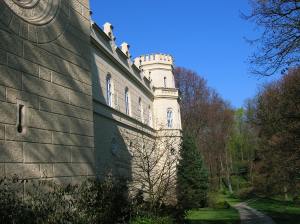 The first room of the tour presented pictures of the chateau in a dilapidated state during 1996, when Lažanský bought it. It seemed a miracle that it had been transformed into such magical beauty during three years, I thought to myself. Even the well-manicured park had looked like a jungle back then.
We walked through one room that exhibited a spectacular Renaissance ribbed vault as well as black-and-white graphic portraits. The next room would become one of my favorites. Baroque master Brandl’s fresco with a biblical motif swirled above me in vibrant colors. I also was impressed by the enticing stucco work in the space as well as the coat-of-arms above the fireplace. From there we entered the space in which concerts and weddings are held. The white Baroque stucco decoration included cherubs, shells and swirls. I was fond of the pink, Czech tea service. The Baroque closet and dresser also amazed. 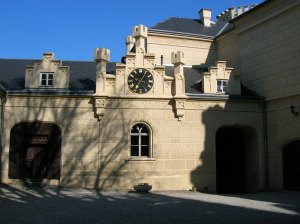 The Venetian porcelain in the following room was one of the most exquisite and fascinating works I have ever seen in a chateau. The blue tea cups were decorated with white lace, it seemed. Even in a close-up examination, the decoration looked like lace. But it was really painted onto the cups. The wooden chandelier also got my attention.
There was Czech porcelain from the early part of the 19th century in the Summer Dining Room. I saw an exhibition of porcelain and pots in the small space where they prepared food near a hallway that led to the kitchen. In another hallway was a lush carriage from 1913. It had been used for weddings.
Then we went upstairs. I was taken in by the painted, diamond shapes on the ceiling in the hallway. The apartment of Prokop II Lažanský included portraits of his great grandparents and a 400-year old fireplace that dazzled. A clock with what looked like gold griffins on its sides dated back 150 years. A portrait of Count Vladimír Lažanský, who had employed Karel Čapek, hung in the portrait gallery. I noticed that he had a puffy moustache, beard and oblong face. Two tables were set with delicately painted Easter eggs, as it was a few weeks before Easter when I was there.

The small library contained 30,000 volumes. In it I saw a black-and-white fireplace in Second Rococo style; it appeared to be made of marble. The piece of furniture that got my attention in the children’s room was a dresser that marked the end of Rococo style and the beginning of Classicism. A bedroom was decorated in white – a white bed, a white dresser, a white chaise lounge. It emitted a feeling of purity. The furniture in this room was about 200 years old.
Then we came to Karel Čapek’s modest room which only got sunlight in the early morning, not providing optimal writing conditions. The furniture consisted of a small, wooden bed and a desk on which was an old bottle of Mattoni water with a German label, a white porcelain cup, about 10 books, an inkpot and a porcelain dog. 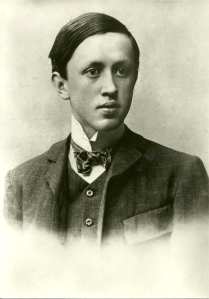 Čapek had taken the job as home tutor to the often misbehaving 13-year old Prokop IV Lažanský in 1917 when he was 27 years old, a year and a half after finishing his university studies. He had wanted a job that entitled writing, but could not find anything as an editor or journalist. (That fact astonished me and gave me some hope as I at the time could not find much work in writing or publishing.)
Čapek spent five months at Chyše Chateau, having tutored the boy in Prague for two months prior to his stay there. In his letters the to-be renowned author complained about not having time for his writing, though he did get some inspiration. During his tenure there a factory employing 14- and 15-year old teenagers exploded. Perhaps that influenced his decision to write Krakatit in 1933. He also spent time chatting with the gardener, as he was a lover of gardening and even wrote a book about the subject.

I could not believe that I was actually seeing a place where Karel Čapek had lived! He had walked on these floors, slept there, wrote there, woken up to the sun shining through the window there. This small, modest room was the highlight of the tour for me. I felt as if I was stepping on holy ground in this almost claustrophobic room.
After leaving Čapek’s room, I saw hunting trophies – a zebra decorated a wall as did the heads of antelopes. A boar hung above the doorway while a leopard skin rug decorated the floor. I am not too fond of anything to do with hunting, though.

Soon the tour was over, and it was time to visit the Karel Čapek exposition in part of the chateau’s ground floor. I stared for a long time in awe at the round, wooden desk and blue- with-white decorated chair where Čapek had written the philosophical, third volume of a trilogy called An Ordinary Life. The chair did not look especially comfortable, and I wondered if Čapek had suffered from a bad back.
I read information about Čapek’s tenure at Chyše Chateau on the walls. The then aspiring author had earned 100 crowns monthly for his tutoring of Prokop IV. That was almost nothing today. I wondered if it had been a substantial amount back in 1917. After his seven months in Prague and Chyše, he did become an editor, by the way.
I also saw reproductions of photos of Čapek, the chateau and 13-year old Prokop. Vladimír Lažanský sported a top hat and big moustache. I also looked at an aerial view of the town. The reproductions of Čapek’s letters were intriguing. In one correspondence with Czech writer S.K. Neumann, he complained that he had no time for writing here.

Various editions of a book about Capek’s sojourn there, called Kruh mého času and authored by Marie Šulcová, also decorated one wall. On the walls I also took notice of quotations from An Ordinary Life and scenes from his plays such as The White Plague and The Makropolis Thing. His time during 1932 in Karlovy Vary was documented as well. There, Čapek had worked on the second volume of his trilogy, Meteor.

But that was not all Chyše had to offer. I also saw the brewery next door. While beer-brewing in this town dates back to the 16th century, this brewery was constructed between 1839 and 1841. Behind the brewery is what remains of Renaissance walls from the original building. The chateau’s brewery closed down in 1932 due to its inability to keep up with other brands . It was used as a granary and then boiler house. In 1994 the place began to deteriorate. 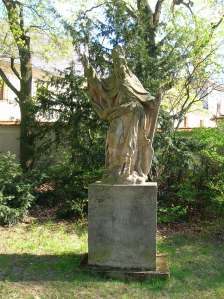 A statue at Chyše Chateau

Then, during 2003, the Lažanskýs bought it, and restoration began. Even the cellars were restored to their Renaissance appearance. The brewery opened again June 1, 2006. I found the beer very tasty. It was a golden color, not too light and not too dark. I tend to drink gold-colored or dark beer, so it was perfect for my palette.
After I had walked through the dazzling park, I had lunch in the brewery restaurant as I devoured chicken with ham and cheese and, of course, diet Coke. I was happy that day as I made the journey back to Prague, via taxi and Karlovy Vary, with a two-hour Student Agency bus ride that did not feel long at all.