The breathtaking view from Hukvaldy Castle

A bus took me directly from Frýdek Místek to Hukvaldy, where I embarked on the uphill, demanding 20-minute walk in the scorching heat. The moment I reached the entrance to the castle ruin in northern Moravia, I was beside myself.

The views to the gentle, green Beskydy Mountains, which loomed in the distance, were magnificent. Supposedly, one could even sometimes see as far as the Jeseníky Mountains and Praděd Mountain in the Jeseník region. I saw picturesque, romantic villages in undulating valleys, the lush green of the mountains surrounding the dots that made up the small towns.  I wondered if I could see the Polish or Slovak border. 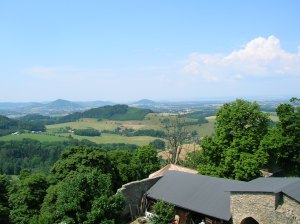 The views from the castle ruins are breathtaking.

Upon entering the castle ruins, I was in for an even bigger surprise. The castle ruins were just as romantic and picturesque as were the views from the wall at the entrance. The music of Leoš Janáček, a native of this village, kept racing through my head. All those compositions inspired by Moravian folk music, the unique melodies and specific, repeating motifs. Before I came to the castle, I had stopped at the local school, where Janácek was born, the ninth child out of 13, on July 3, 1854. 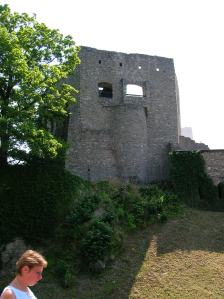 The castle dates from the 13th century.

I skimmed over a brochure about the castle’s history. The monument dates from around 1285. Olomouc bishops gained ownership of the castle in the middle of the 14th century, then the castle changed hands several times before King Jiří of Poděbrady bought it during 1465 in order to return it to the bishops. From that point on, the Olomouc bishopric and later archbishopric were almost continually the owners of Hukvaldy until it became state property in 1948.

The ruins even have their own ghosts.

The castle became a ruin in the 18th century.

The once vibrant castle became a ruin in 1762, when a fire broke out after lightning struck the fortress. Yet the Chapel of Saint Ondřej remains almost untouched since its construction during the end of the 17th century. Decorated with statues of Jan Nepomuk and František Xavier, it is a real, though small, gem.

Hukvaldy even has its own ghost named Světlík, who was killed by a hejtman that wanted to marry his beautiful daughter. Světlík refused to let him do so. The castle had a famous prisoner, too. Philip Dambrovsky was accused of poisoning four Olomouc bishops.

A view through the ruin

Another view of the ruin

As I walked through the gates and courtyards, strolled around the bastions, peeked into the cellars and took note of the destroyed buildings that were once occupied by the burgrave, I felt energized from the power that was emitted by the stone walls and fragments, as if this place had a significant story to tell and was telling that story as I stepped through its magical gates.

You can almost hear Janáček’s music coming from the ruins. 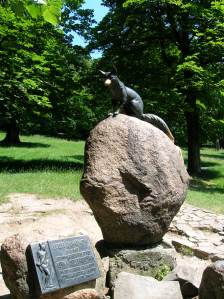 A statue of a fox commemorating Janáček’s opera, The Cunning Little Vixen.

The views of the mountains in the distance are sure to amaze. 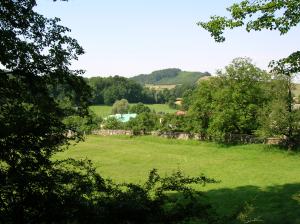