The direct bus from Prague to Velké Meziříčí – believe it or not – arrived early: It got in at 8:45 instead of the scheduled 8:55, and on a weekday, too. Almost two hours from Prague, the south Moravian town is on the bus routes to Jihlava and Brno.

Dating back to the 1330s, the chateau boasts some intriguing legends and is connected with some significant historical events. According to one legend, a week before the 1723 fire that ravaged the town and chateau, at noon the chateau clock tolled 102 times instead of 12 times. A week later 102 buildings had incurred damage from the fire, including the town hall. Another legend concerns one of the former owners of the chateau – Duchess Marie Eleanora from Guastalla and Sabionetta. After dying tragically in a horse riding accident, she began to haunt the chateau as its so-called “White Lady.”

Historical events also took place here.  In August of 1415, chateau owner Lacek of Kravaře ushered Moravian nobility to the chateau, trying to convince them to sign a protest against the incarceration of legendary Czech priest, philosopher and reformer, Jan Hus, who had been accused of heresy against the Catholic Church.

The chateau went through several renovations. It was Jan the Younger from Meziříčí who changed it from a Roman Gothic castle to a Renaissance chateau in the 16th century. Later, in 1733, Baroque elements were added. Owner Rudolf Lobkowicz gave the chateau a Neo-Gothic flair. 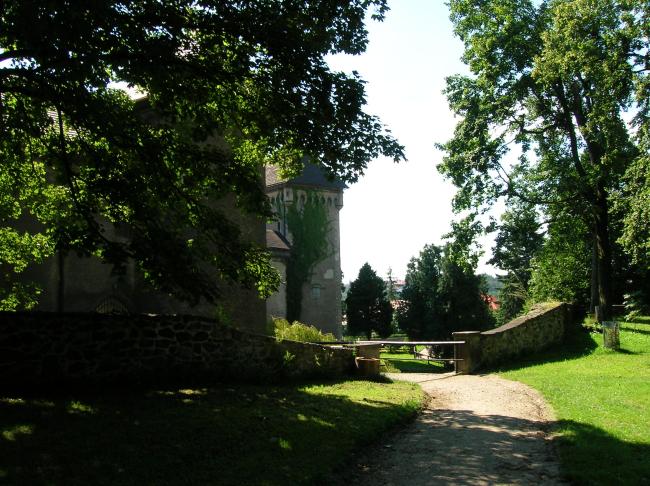 Other former owners made their mark in the chateau’s history as well. For example, Marie Eleanora Liechtensteinová also served as Lady of the Bedchamber for Holy Roman Empress and Sovereign of Bohemia Maria Theresa of Austria. She became a close friend of the Empress’ daughter, French Queen and Navarre Queen Marie Antoinette, who also was the Archduchess of Austria. During the 18th century French Revolution, Marie Antoinette gave her good friend her exquisite, wooden desk. The chateau also obtained Empress Maria Theresa’s unique, black glass funereal necklace, which she had worn after her husband, František Štěpán Lotrinský, died. I was enamored with both items in the former Dancing Hall.

Former owners Rudolf Lobkowicz and František Harrach were world travelers, bringing back souvenirs from Asia, for example. These are displayed in the Oriental Salon. Some objects from Japan that caught my attention included a black and gold wardrobe, a jewelry box for traveling and a red chest. I also saw silk-topped paintings. The picture of a pagoda was exquisite. A precious Baroque table was decorated with a picture of the town.

Known as a collector, traveler, poet, press editor and economist, Harrach was also an aide to Archduke Ferdinand Karl Joseph of Austria-Este, better known as Archduke Ferdinand d’Este. In September of 1909, Harrach hosted d’Este plus Emperor of Austria and King of Bohemia Franz Joseph I and German Emperor and Prussian King Wilhelm II as well as other historical figures during military field maneuvers. The bedroom where Emperor Franz Joseph I slept was one of the many highlights of the tour. I marveled at the ornate wooden décor of the bed frame and gazed at Emperor Franz Joseph’s portrait hanging nearby.

But perhaps Harrach is better known for his participation in one particular historical event. When Archduke Ferdinand d’Este was assassinated in Sarajevo on June 28, 1914, Harrach was sitting next to him but escaped injury. Harrach swabbed blood from Ferdinand’s fatal wound with his handkerchief, and at the chateau I saw the blood on a white background in a black frame marked with the date and year of the tragedy. That was the most impressive feature of the Serbian Salon, which also was home to many photos of Archduke Ferdinand d´Este and Emperor Franz Joseph I.

When Harrach died, his daughter Josefa inherited the chateau, but she was forced to emigrate in 1948, after the February Communist coup. The chateau was nationalized and served various functions in the 20th century – it has been and still is a museum; it also has served as a state archive and a maternity hospital. In 1995 the chateau was returned to the family. Now Josefa’s three sons look after it.

Other items that particularly impressed me were the life-size portraits of nobles on the landing. I felt as if the portraits could swallow me up. Three coats-of-arms with Baroque golden frames also enriched the landing. The Men’s Salon featured an exquisite brown tapestry of leaves, fruit and branches as well as a jewel box made of tortoise shell and silver. A unique stand for cigars also decorated the room. The chandelier was unique as well – it was made out of deer antlers and brass.

The former Dancing Hall held more treasures than Marie Antoinette’s desk and Maria Theresa’s necklace. I also saw Rococo furniture and a Baroque black closet decorated with ivory. The Rococo Dining Room was light and airy and used for concerts. The frescoes on the walls showed Czech streams, bridges and cottages, a sort of idyllic country life. Another fresco portrayed the chateau in Baroque style and still another depicted a town celebration. I gaped at the Venetian chandelier. It had diamond-shaped glass pieces. I loved Venetian chandeliers!

Then I came to the museum section of the chateau. I was impressed that the museum hosted a very eclectic collection of items. With displays ranging from Cubist furniture to town life during the last 600 years, every room held a different surprise.

In the hallway there was an intriguing sculpture exhibition by Velké Meziříčí native Jiří Marek, who lived from 1914 to 1993. His large wooden figures twisted in agony. I could almost feel the pain portrayed in the sculptures. The pain was almost tangible. In one sculpture Marek had created a limp hand so realistically. His figures reminded me somewhat of those created by legendary Czech sculptors Frantisek Bílek and Franta Uprka. 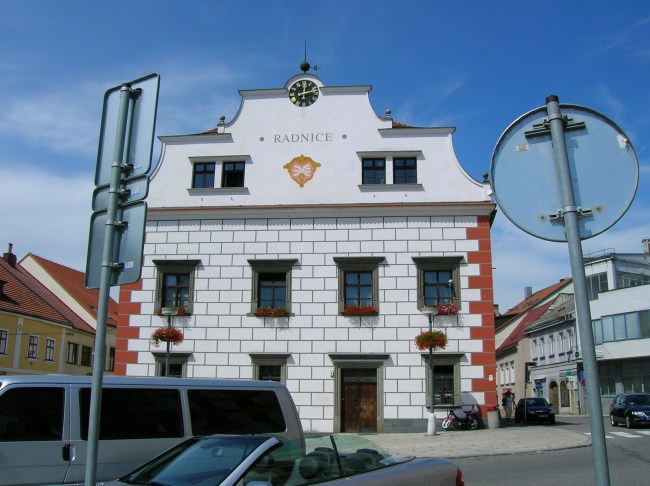 In the Velké Mezíříčí town exposition the uniform top of the Pioneers Communist youth organization from the 1980s got my undivided attention.  In a display case was a light blue shirt with a red scarf that I have come to associate so well with the Pioneers’ organization. Because I hadn’t experienced Communism, the uniform shirt captivated me. I wondered if the parents of the child who had worn these clothes had actually believed in Communist ideology or if they had dressed their child this way out of fear.

The exposition also showed what kind of clothes townspeople wore during the 19th century and what sort of furniture could have been found in their homes. Tapestries depicting scenes from town life hung on the walls.

Soon I came to the Cubist rooms – a Cubist living room in one space and a bedroom of that style in another. The Cubist furniture was designed by well-known architect Pavel Janák and the famous Artěl group in Prague for a prominent Czech mathematician and physicist. Janák’s box with a top, its black stripes on white almost hypnotizing me, was in one display case. What impressed me the most was the Cubist couch. The back was composed of three triangular shapes, the middle one at a different angle than the outer two. 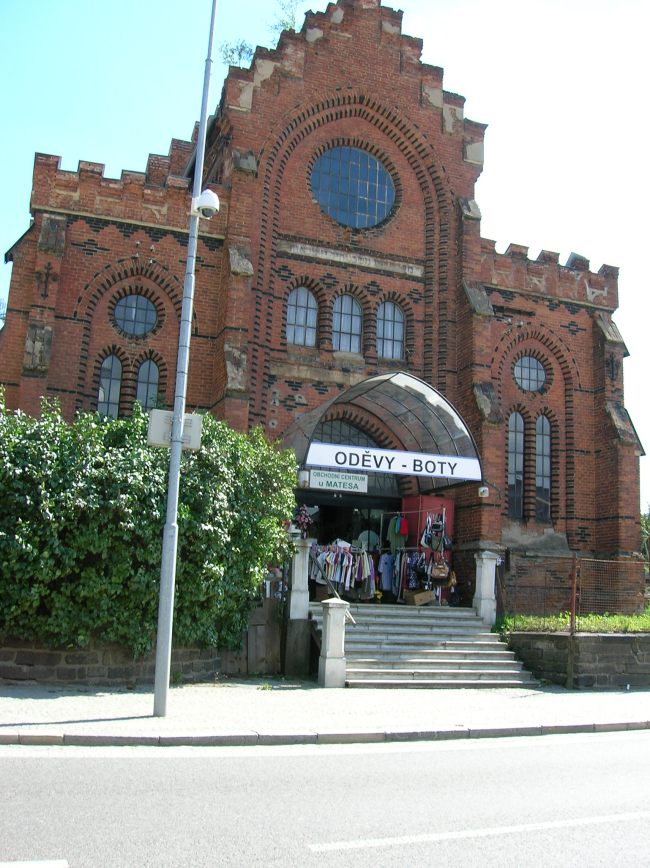 Then I made my way to the Jewish synagogue, which was strongly advertised on the town’s Web pages. (Later I found out the advertised synagogue was a different one, which is now used as an exhibition space.) The red brick façade was beautiful, but the inside was a disappointment. Vietnamese sold their goods in the interior, as row upon row of cheap clothing littered the spaces. I saw a straw hat with the words The Czech Republic written on the brim and packs of underwear as well as backpacks hanging from a wall. I had expected that this synagogue would be a sort of museum open to the public, possibly with tours and information about Jewish life in the town. I soon left the synagogue and continued toward the main square.

On the main square there was a quaint church, an impressive town hall and stunning sgraffito on the façade of several buildings. I ate lunch – turkey in some gross-looking but thankfully tasteless sauce – in a garden restaurant where the service was slow.

Then I headed back to the bus station to get the one o’clock back to Prague. I was the only person at the stop, which made me wonder if I was standing in the right place. I became nervous. When the bus didn’t show up by 1:10 pm, I was worried. It did come, though, at 1:20 pm, and soon I was on my way home, with fond memories of the chateau’s representative rooms and the diverse displays of its museum. 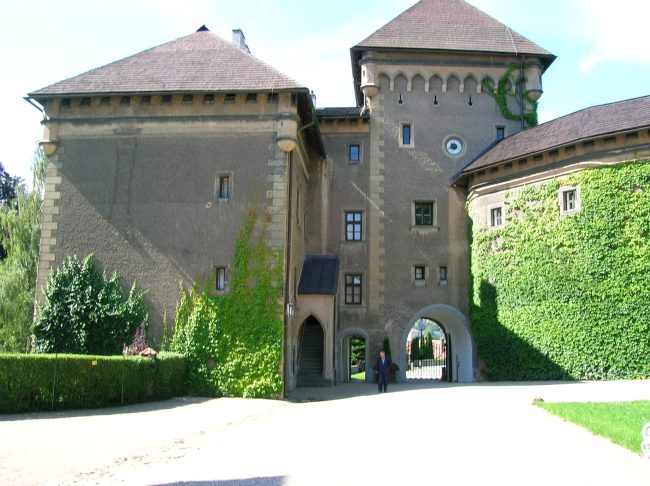 Tracy A. Burns is a writer, proofreader and editor living in Prague.